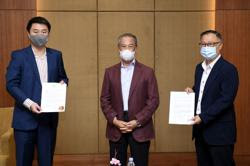 In January, when the Agong finally granted PM Muhyiddin Yasin his wish for Emergency rule, purportedly to help contain the rising Covid-19 cases, there were those among us who were skeptical and those who chose to believe what they were told: that this was a "political Darurat". To allow Muhyiddin to focus on saving our lives, he needed the political Darurat so that his position as PM is secured and not threatened by political threats. Talks of no-confidence vote in Parliament must not be allowed.

And so, in the name of God, Parliament would not sit until a time set by the King. (read the PM's full speech on 12 Jan, the day after Darurat took effect, here).

24. Of late, there have been parties urging for elections to be held. I never have the intention to not have the elections. The main thing that prevented me from advising His Majesty the Yang di-Pertuan Agong to dissolve Parliament to enable the General Election to be held is the COVID-19 pandemic.

25. The decision not to hold elections amidst the ravaging COVID-19 pandemic is in line with one of the five principles of Maqasid Syariah which is to take care of life or hifz al-nafs. In this context, it is my duty as the Head of Government to take care of the lives of the people by protecting you all from COVID-19 infections. This is the most important task as enshrined and propagated in Islam.

26. Therefore, I want to give my firm commitment here that the General Election will be held as soon as the Independent Special Committee acknowledges that the COVID-19 pandemic has subsided or fully recovered and elections are safe to be held. At that time, it is up to the people to choose which government is capable and would be given the mandate to govern this country and take care of the welfare of the people. Trust me, this is my commitment and pledge which I will fulfill, God willing.

27. For me, in a situation where the country and people are facing great harm, it is very important that all politicians set aside their political differences and stand in solidarity with the people. When it comes to time for politicking, then do so, with responsibility.

It's been nearly two months. The Darurat is still in effect, with no sign of it being lifted (except for the King's rather queer statement the other day that Parliament can sit despite Emergency.)

Since the Emergency took effect on Jan 11, there has been no talk of a no-confidence vote and no claim by Anwar Ibrahim or anyone else of having majority in Parliament. The Opposition even decided to take part in the bi-partisan committee to advise the King on the Darurat.

The ones who have shown no regards for the political Darurat are the three Berhormats in the photograph above.

Muhyiddin and  his the new political asses he had just acquired not only defied the principles of the political Darurat, they did it with no qualms whatsoever. After all, there are those who will believe whatever the PM and his new political assets tell them ....

... like when the PM says the defections would certainly help in the fight against Covid-19 :) Read here; excerpts:

Muhyiddin, in a post on his official Facebook account, said the SDs were handed over to him by Julau MP Larry Sng Wei Shien and Tebrau MP Steven Choong Shiau Yoon.

"The SDs were signed and handed over to me after the retreat of the Cabinet members in conjunction with the one-year anniversary of the PN administration in Putrajaya," he said.

Muhyiddin expressed his gratitude as the support would certainly strengthen the PN government in its efforts and plans to manage the Covid-19 pandemic and the country's economic recovery.