The continuing quest to shove the Emergency down our throats

KUALA LUMPUR – Lawyer Syed Iskandar Syed Jaafar today said he is seeking legal action against his detractors after it was reported last Friday that he was “suing” the Yang di-Pertuan Agong. [Read the full story in The Vibes, for free]

Bangsar, 3 Nov: Good thing this guy wanted to explain himself. That he's not suing the Yang DiPertuan Agong. That, on the contrary, he is on the King's side where the Emergency controversy is concerned.

Well, well. The fact that Syed Iskandar Syed Jaafar had to clarify his action is proof that his intention wasn't clear, right? In fact, it's still not clear to some. A hot shot lawyer I spoke to after Syed Iskandar's article was published in The Vibes earlier today thought of it as hogwash, "Who is he trying to fool? His action amounts to an attack on the Agong!".

In any case, it's good to know that this lawyer Syed wasn't acting on the behest of any politician or political party. Hard to believe, yes, but I say we should give him the benefit of the doubt.

On the other hand, very little doubt who this Cabinet minister is speaking for or against: 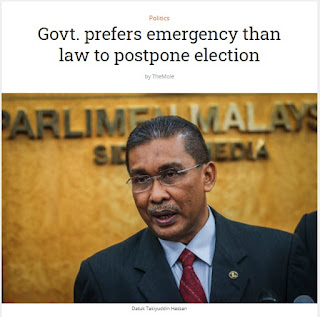 KUALA LUMPUR, Nov 3, 2020: The government prefers the option of invoking a proclamation of emergency rather than trying to introduce a law or amend the constitution in order to hold off elections due to the Covid-19 pandemic.

He stated that creating a legislation to postpone an election during the pandemic is against the constitution.

“The government may propose to postpone an election if this pandemic is deemed to be declared an emergency as provided under Article 150 (1) of the Federal Constitution,” he said.

Mahdzir had asked whether the government intends to amend the Constitution or create a specific Bill to enable an election to be postponed during the Covid-19 pandemic to contain the virus.

The government had previously raised the emergency proclamation but it was rejected by the Yang Di Pertuan Agong on Oct 25.

The government’s move has led many quarters to accuse it of resorting to an emergency declaration to avoid Budget 2021, which is scheduled to be tabled on Friday, being defeated in parliament.