A Budget that unites, but not as planned

United! United! Hell, yes. But instead of getting everyone - the MPs, detractors, and the hopeful people - to rally behind him, which was the plan, Prime Minister Muhyiddin's Budget 2021 have united them against his Government, instead. 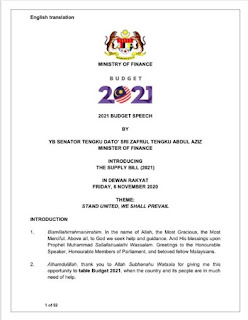 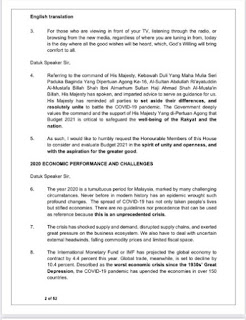 But what could have been a walk in the park for Muhyiddin and Co is now a painful swim in mud and sludge. Where did the Budget go wrong? Was it the RM85 million for JASA? Was it the unjustifiable, nearly RM4 billion more for the Prime Minister's Department? The record amount of debts the Government will accrue just to keep paying their high salaries and service their debts?

It may be all of that and the fact that the people are not stupid anymore, which means it's not possible to even fool some people some of the time. Some people are pleased with it but everyone has something in the Budget to bitch about, from healthcare spending 'cuts' to unreal tax revenue forecast for next year and the absence of a real, long term plan to help the increasing number of poorer and jobless Malaysians.

But, most of all, I think the Budget is a victim of a Government losing the trust of the people, especially since its botched attempt to impose the Emergency on all of us. And, believe it or not, there are still Ministers in Muhyiddin's Cabinet who are still threatening us with it, even after the King has said NO to it.  This alone has convinced me that even if Tengku Zafrul Tengku Aziz, the Finance Minister, had tabled last Friday a different Budget, the best Malaysian Budget ever, he would still find us standing united against him, the Budget, Muhyiddin's government.

A Budget negating the need for an Emergency - The Mole

Msian govt prepared to return to King, ask for state of Emergency if necessary - Today