If Vinod is a bankrupt (and he's doing so much good for so many people), then what we need is more bankrupts like him 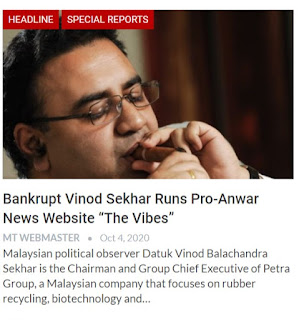 TTDI, 5 Oct: You may or may not have read this recent article about Vinod Sekhar, the man who inspired the setting up The Vibes, that portal to watch.
Exceprts:

Datuk Vinod Balachandra Sekhar is the Chairman and Group Chief Executive of Petra Group, a Malaysian company that focuses on rubber recycling, biotechnology and financial software. He is also the chairman of the Sekhar Foundation, based in Kuala Lumpur and the CEO of Green Rubber. He was named by Forbes magazine as Malaysia’s 28th richest man in 2009.

That much is true. The photograph of Vinod that RPK used for the article is a bit dated but the son of one of Malaysia's great sons still loves his cigars, for perhaps that reminds him of those five days in Havana* he spent with the great Fidel Castro in a spring of a previous lifetime. Yes, I know a bit about Vinod and who he's close to other than Anwar Ibrahim just as the man can tell you a bit about me and who I'm close to (and that certainly won't be Anwar Ibrahim). I have to know the guy if I was going to agree to help him on something as important as setting up a fearless and fair news portal, right?
And here are some of the things what Vinod has been up to lately, things the anonymous writer of the article in RPK's Malaysia Today does not know or does not want you to know:
1. The Sekhar InitiativeThe Sekhar Economic Initiative is a project to provide economic assistance to various SMEs, petty traders, farmers and the lower income groups that are involved in commercial activity to sustain their livelihoods. The assistance is given through investments (we cannot call it a loan) ranging from RM5,000 to RM50,000. The investments are interest free and can be returned in instalments over 2 to 5 years, with the first returns only expected 12 months after the initial investment was made.The requirements to get this investment is merely providing a business plan to keep the business running and to keep all staff or workers employed.The objective is to help the SMEs and petty traders from going under during this challenging time and to bolster the economy of the nation by keeping the SMEs (the backbone of our economy) alive and well.The Ranau project, is the initial investment made in the farmers of Ranau to ensure that their businesses can survive and grow. It is a part of the greater initiative to provide investment to this target group.2. Rescued stranded Malaysians in India during the MCOYou didn't read about it in the papers because he did not want the publicity Well, there was a a little publicity just a very little:

3. Sent RM1.5 million worth of masks to Sabah at the height of Covid. Zero publicity4. Collaboration with Pusaka and local entertainment gigs to help out Malaysian artistes5. Working with RIMAU (an NGO that focuses on saving the Malayan tiger) the foundation has sponsored the setting up of the MENRAQ. The Menraq are squads of Orang Asli trackers that have undergone training with the Perak Park Forest Rangers to search for, identify and dispose of the thousands of snares placed in the Royal Belum Rainforest by illegal poachers. The poachers use these snares to trap all kinds of animals, the most prized of which is the tiger.The funding provided by the Vinod Sekhar Foundation goes towards the Menraq's training, uniforms, equipment and their wages for carrying out patrols in the forest. Whenever a team of Menraq go into the forest for patrols, a percentage of their wages is also contributed to the villages they hail from. This provides the Orang Asli with an economic opportunity to earn wages as well as support their communities. It gives the Orang Asli a great sense of accomplishment, while working (for a fair wage) in the environment they are most comfortable in - the forest. The word "Menraq" is derived from the Orang Asli word for community. The project has been implemented with the Jahai tribe of Orang Asli from the village of Kampong Tanhain.This project serves to save the tigers while also helping the livelihoods of the Orang Asli.The Menraq project will be followed with a larger scale project to create the PETRA Rangers - auxiliary police officers that undergo forest ranger training. These rangers will patrol the forest together with the park rangers and members of Menraq to track down the poachers and arrest them. The auxiliary police personnel have the license to carry arms and have the power of arrest. The PETRA Rangers project is a work in progress as we are working with the Perak State Parks Dept. to get the project off the ground.There is a much greater plan for Belum and the Orang Asli, but more about that later.
6. Donated money to the National Press Club of Malaysia's Journalist Welfare Fund at the start of the MCO to help needy journalists and those who were on duty during the semi-lockdown.
These are just some of the things Vinod has been up to in the last few months. You'd notice that there has been very little news about these things. The problem with the man, many of us agree and have told him, is that he insists on getting no publicity for the good he does.
I sat down with Vinod for a couple of months to help and inspire a fair and committed news portal for the benefit of the public called The Vibes, which RPK's Special Report describes as "pro-Anwar". I must tell you more about The Vibes in a later posting. For now, my point is that if this man whom RPK (and his Anonymous friend) called bankrupt is really so, then we need more of such bankrupts rather than people who say things but do nothing for the general well-being of society. People with their own self-serving agenda.
So, you may ask, is Vinod a bankrupt in the first place?
I know for a fact he is not. And that RPK, for reasons best known to him (and the Anonymous who wrote the article), did not bother to check.
* A book on this is in the making, I was told
at October 05, 2020