What now, after Saturday's election?

Bangsar, 29 Sept 20: Got myself this Toughbook CF-SZ6 on Sunday, the day after the Sabah state elections, which voted out Shafie Afdal's Warisan and, effectively, buried Musa Aman's too long and colourful political career. Read Hajiji sworn in as Sabah CM 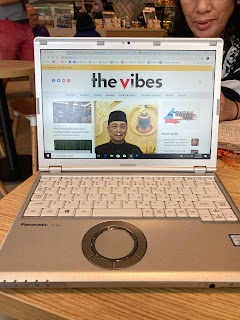 The snap election also saw two other former chief ministers losing badly in their comeback attempts - one even losing his deposit! - as voters made it clear that they've had enough of the old guards and useless Sabah-centric rhetoric and welcomed fresh faces and younger voices.

This isn't my first Toughbook and I was only recently a Mac user. When I was that blogger and when blogging was fab, the Panasonic was my weapon of choice. Then one day they smashed the window of my Rexton and pinched my Toughbook :( I changed to a Ferrari (the laptop, not the car) but those goons from Malaysian Communication and Multimedia Commission (some later became my friends) raided my home and confiscated the Ferrari (for the record, they never gave back the Ferrari to me).

Then I switched to the Apple. Nobody messes with the Apple but I've decided the Mac is not for me. We never did "click", if you know what I mean. So when Terence Fernandez, the managing editor of The Vibes asked me to start a column for his new portal - and the www.thevibes.com is certainly the portal to watch - I told myself I will need something else than the Mac to get through this frosty writer's/blogger's block. Something new but, at the same time, something familiar.

Just like the Sabahan voters, I suppose, I opted for one that I know will work hard for me. And, hopefully, when the going gets tough ...

p.s. Panasonic did not pay me to write this piece. I'm actually hoping that The Vibes will pay for the Toughbook!