IN Questions rife in Sabah elections, Philip Golingai, otai columnist and journalist of the Star, refuses to make predictions, even after having spoken to scores of voters on his 1,300 km sojourn around the North Borneo state to try and feel the mood on the ground ahead of the 26/9 polls. "Right now, it's still iffy ...," he writes in his column. Iffy, indeed. We aren't even sure if there will be elections in the first place (read Federal Court allows Musa Aman to challenge Shafie Afdal's appointment as Sabah CM).

And if Sabahans do get to go to the polls, the dynamics of this snap elections are like nothing they have seen. "It's a free-for-all," says another seasoned reporter.

Already, we're seeing Anifah Aman, probably the best Foreign Minister this nation has ever had, drawing keen attention during his walkabouts at his ancestral hometown Beaufort. He's had heated exchanges with caretaker CM Shafie, a former Cabinet colleague, over the latest claim over Sabah made by the Philippines, an issue that will win (and lose) a lot of votes. This suited Anifah. Shafie and contingent, on other hand, were seen last week in Anifah's stronghold. Coincidence? Maybe, but some political observers think Shafie, a consummate politician, may have felt the need to see for himself the potential threat from those parts of the State.

Other than Anifah, who's very clear about his intentions (Anifah offers himself as alternative to Musa, Shafie), there's the extremely likeable and capable Masidi Manjun of Bersatu and there's the comeback (old) kid Cheong Kah Kiat, who was CM from 2001 to 2003. 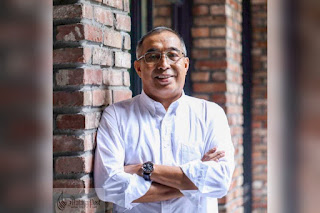 And as if Sabahans are not already spoilt for choice, there's talk that another former Sabah CM (1994-96) is on the way back. Salleh Said Keruak would tell friends that his application to become an Umno member has not even been approved, but there are already rumours about him - not Bung Mokhtar - being Umno's CM candidate for the 26/9 elections. Salleh may be fielded in Usukan, known for its beautiful cove, snorkelling and fishing.

All this, mind you, is just the warm-up. Looking forward to reading Philip Golingai's predictions for the Sabah elections ...
at September 01, 2020