So who's behind Syed Saddiq's youth party?

Overheard at the airport, while catching a flight to Kota Kinabalu:
Man 1: Syed Saddiq is setting up a party for youths
Man 2: Syed Saddiq should get a real job first
Man 1: I would hire him as a model ... :

Subang, 24 August: In the run up to the last general election, he promised youths free education and a solution to student debts, which he didn't successfully pursue after he'd won the election and made a Minister, the youngest anywhere in the democratic world. As Government, Syed Saddiq made it his mission to get youths gainfully employed, went as far as lobbying Gojek to come to Malaysia despite a fellow minister's worries about the obvious risks to the youth riders. One year as a Minister (which was his first job, really), Syed Saddiq announced that the government was going to set up a task force to create one million jobs for youths. Little was heard about the task force after the announcement but the task force's chairman, then-Prime Minister Tun Mahathir Mohamad, last week set up his latest party and Syed Saddiq, a Mahathir loyalist non-pareil, followed that up yesterday, while campaigning for Mahathir party's candidate in Slim bye-election,  with a confirmation that he would set up his own youth party fashioned after Thailand's Fast Forward and Macron's En Marche in France.

But think what you like, the young man, who turns 28 this December, is on to something big. By the next GE, if it happens in 2023, there will be some 7 million young, first time voters joining the 14 million who voted in 2018.

Something tells me it is unlikely that Syed Saddiq is acting alone on this youth party idea. Behind every young man like him, I believe there's a very old and most wise man.  I may be wrong, but we'll see  ... 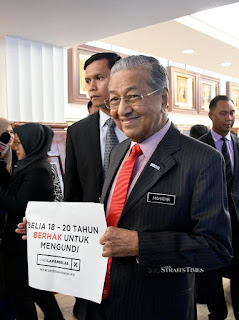