This may not be the government you voted for but ...

If you didn't know why PM Muhyiddin did not thank the previous government .. 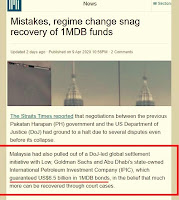 
Original article:
Puchong, 15 April: Prime Minister Muhyiddin Yassin has thanked the US government for returning the misappropriated 1MDB money. He also thanked the Ministry of Finance and the AG's Chamber for their roles in the negotiation process.

He's looking sharper by the day, the Prime Minister.
And happier.
He should be.
The people are behind him in the battle against Covid-19.
The Movement Control Order is showing positive results.
And this repatriation of 1MDB money will be viewed as the US government's tacit recognition of his so-called "backdoor government". 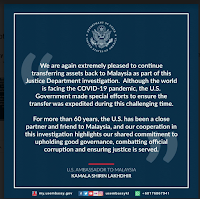 The Department of Justice announced today that it has repatriated to Malaysia approximately $300 million (RM 1.292 billion) in additional funds misappropriated from 1Malaysia Development Berhad (1MDB), Malaysia’s investment development fund, and laundered through financial institutions in several jurisdictions, including the United States, Switzerland, Singapore and Luxembourg.
Combined with other funds that the department previously returned to Malaysia in May 2019, the United States has returned or assisted Malaysia in recovering over $600 million (RM 2.6 billion) of funds misappropriated from 1MDB.  The department’s efforts to recover funds misappropriated from 1MDB are continuing.
In 2019, the U.S. District Court for the Central District of California entered judgments forfeiting more than $700 million in assets acquired by Low Taek Jho, aka Jho Low, and his family located in the United States, the United Kingdom and Switzerland.  - Read all HERE.