The best (or worst) prime minister Malaysia never had

Dato Seri,
Today, you should finally face up to the fact, that fate does not allow you to become a Prime Minister. It is time to accept the fact, painful as it is, that you will not become the Prime Minister. Thus, to fight fate and still pursue that dream is realistically futile.

Dato Seri,
Believe me, by announcing that you yield in the greater interest of the nation and withdraw from national politics, will show to all you being a greater man. You will etch in the hearts of all Malaysians of a man who put nation before self. You will leave behind an honourable legacy and be respected for giving up your dream and your willingness to make the ultimate sacrifice.

Dato Seri,
Today as the nation lies in turmoil and there is total impasse may be it is time for you to make that announcement.

Believe me there is more to politics. It just that, Prime Minister, you were never to be.

The article above is reproduced with permission.

Puchong, Leap Day 2020: Some people asked why I wasn't writing anything about the on-going political circus. Well, to be honest, I didn't quite know what to make out of the rubbish that the politicians have been churning this past week. Nothing - from Dr Mahathir Mohamad's resignation as PM-7 to his appointment as interim PM and his desire to be PM-8 today - made sense. I kept on seeing a spoilt child refusing to return the toy car he borrowed, so the child decided to throw tantrums and threatened to throw the toy away instead of giving it back to the rightful owner. But then was Anwar Ibrahim ever the rightful owner of the 8th PM's seat to begin with? Lawyer Norman Fernandez, the former DAP deputy chairman of Johor, thinks for the sake of the nation perhaps it is time Anwar abandon his dream to become the PM and walk away from national politics.

To become the best - or the worst - PM we've never had.

But Anwar is only half the problem, if you ask me. Both he and Dr Mahathir should walk, hand in hand, into the sunset. Even that won't be enough to save Malaysia right away but at least we'll stand a better chance.

P.S By the way, it is not true lah that I did not write anything at all about the circus. I did post some stuff mostly one-liners, on social media. For example, this tweet I published with glee upon hearing the news that The Old Man had resigned:

Bangsar, 19 Feb: So, was it an offset program after all? The Star's article (see below  or  type here for link) avoids any reference to the word but if you have been following the Airbus corruption scandal, especially Dr Mahathir Mohamad's initial response to it when asked by the media (Dr M: Offset is not a bribe if it's for specific purpose) on Air Asia being implicated, you will be wondering if the whole thing wasn't an offset after all. But even if it wasn't, let's admit one thing: it was a brilliant strategy. It sure helped turn Air Asia into a global brand although there are enough Tony Fernandes-haters out there to disagree. Me, I remember salivating over the picture of a could-be Caterham motorcycle back then Tony and his partner Kamaruddin Meranun attempted to shock the world with their own F1 team ... 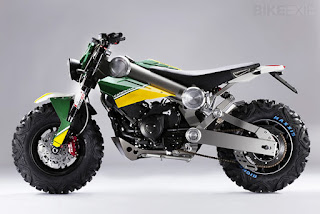 In any case, it's good to know that AirAsia is fighting the Airbus accusation(s). I imagine it will be its toughest battle yet: three authorities - the Malaysian Anti Curruption Commission, the soon-to-be-dissolved Mavcom and the Securities Commission (and one of them clearly holds grudges against Fernandes, Din and Co) - are investigating the case and a small but determined army of Twitter warriors are out to bury Tony Fernandes once and for all. I hate to say that the truth will prevail because it's so cliche but ... the truth will prevail. We'll just have to wait a bit.

But in the meantime, I strongly feel the Government should suspend all contacts and contracts with Airbus. The aerospace giant is neither a hero nor courageous; by its own admission, it has been a great corruptor. Back home, it has "paid" for its sins. But if it's guilty of bribing anyone here in Malaysia, we should make Airbus pay dearly. 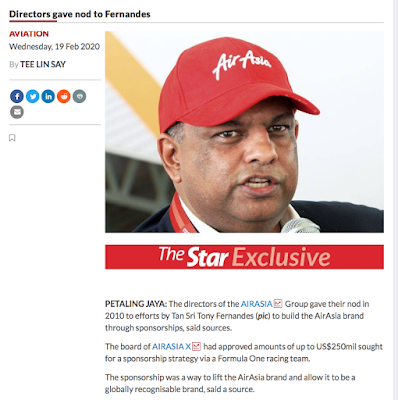 PETALING JAYA: The directors of the AirAsia Group gave their nod in 2010 to efforts by Tan Sri Tony Fernandes (pic) to build the AirAsia brand through sponsorships, said sources.
The board of AirAsiaX had approved amounts of up to US$250mil sought for a sponsorship strategy via a Formula One racing team.
The sponsorship was a way to lift the AirAsia brand and allow it to be a globally recognisable brand, said a source.
Fernandes and his business partner Datuk Kamarudin Meranun have been under the spotlight for allegations of corruption involving monies paid for the sponsorship of the Caterham Formula 1 racing team after it was reported that Airbus will pay a record-breaking settlement of €3.6bil in penalties after admitting to bribery across its international business.
The UK SFO allegations concern a US$50mil sponsorship between Caterham Formula 1 racing team, which was founded by Fernandes, and Airbus’s former parent, EADS, between the years of 2013 and 2015.
The AirAsia Group has rejected allegations of wrongdoing involving sponsorship of a sports team linked to the two AirAsia and AirAsia X executives.
Part of the documents released after the settlement between Airbus and SFO of the UK include a trail of emails that show the interactions between Airbus and the key decision makers of AirAsia and AirAsia X.
Based on the document findings that have now become public records, the source claims there are mismatches between the timelines of some of the emails released and the charges levied against Airbus by the SFO.
The source said the content of the emails released before October 2013 were not part of the charge against Airbus. Prior to October 2013, AirAsia secured sponsorships totaling US$66mil from Airbus that was not related to the charge brought by the SFO as the sponsorship amounts of an additional US$50mil in the charge sheet were from October 2013 to January 2015.
“Thus, how can emails for sponsorships that had already happened from 2010 to 2011 be used as evidence for sponsorships in 2013 to 2015?” asked the source.
As Airbus has said that the payments to the sports team were intended to secure or reward improper favor by them in respect of that business, the next question to ask is whether Fernandes acted improperly and did he overbuy planes for AirAsia just to secure the sponsorship?
Back in June 2011, AirAsia and Airbus announced a US$18.2bil (RM54.8 billion) deal for 200 planes at the Paris Air show, shattering the then aviation record for the largest ever airline order.
At that time, analysts had seen the acquisition of the 200 aircraft as a necessity, as the last order AirAsia placed was in November 2007.
Even with that order, Frost & Sullivan Aerospace & Defence senior consultant Kunal Sinha (at that time) said the order would only give AirAsia a fleet of 250 aircraft at the end of 2020. AirAsia continued to lease planes after putting in the huge order.
Another question that would be asked surrounds the pricing for the planes secured by AirAsia and AirAsia X from Airbus. An independent audit commissioned by the board would examine those transactions to ascertain if they were fair or overpriced.
“Perhaps Airbus should allow Fernandes to disclose the price of the planes he acquired for the AirAsia group, and compare it to the price Airbus sold its aircraft to other airlines at that time, ” said the source. The suggestion is that AirAsia paid below the average price other airlines had paid when ordering their planes from Airbus.
The SFO too has has a chequered track record as there have been a number of high profile cases that it has lost in the courts.
The SFO’s charges against former Tesco executives, accused of being masterminds behind a major accounting scandal, were thrown out in December after a judge deemed the case too “weak” to face a jury.
The SFO also saw its case against Barclays bank, over a Qatar fundraising, dismissed by the court in 2018. The SFO later lost a high court appeal to reinstate those charges.
Until 2017, former UK prime minister Theresa May had tried to abolish the SFO. She intended to have the SFO absorbed by the larger National Crime Agency.