One PM, Two Oppositions (The 3 factors pulling this great nation down)

Ah, so this is Christmas ...
I hope you, my Dear Readers, had a merry one.
Me, it was a sederhana one for us. I visited an old buddy at Damansara, who opened his house (and makeshift bar) over (extended) lunch, where I met several other old friends and former little kids who have now grown up into full-fledged adults with their own little girls and boys.
Generally, Hari Natal was a subdued affair. Most everything is, including the manner in which we are ushering in the new year and new decade. The economy is such. As YB Johari Abdul Ghani, the former Minister of Finance ll, said, this beloved country of ours is sinking ... 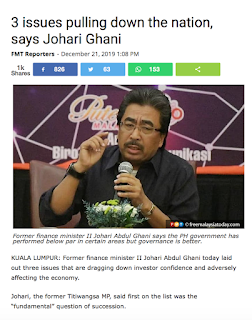 1. The PM. 2. Flip-flopping. 3. GST. You can read Johari Ghani's diagnosis of this nation's 3 big weaknesses here. AKJ, the PM's communications advisor, has taken exception to the former Minister's analysis. That was to be expected, of course.
But the fact is, this great nation is being pulled down, going under. Many factors are responsible but if you ask me to limit them to three, I'd go with Johari. Our problem is we have ONE Prime Minister (who can't or won't let go) who has to deal with TWO (not one) Oppositions, including his own Pakatan Harapan people, who have opposed his decisions and undermine his position on more occasions than we thought possible.