So, this government has fared poorly ... So what?


TTDI, Day 4 of Ramadan: Except, perhaps, for Ramon Navaratnam, everybody else seems to be in agreement that the Pakatan Harapan government has fallen short of expectations after its first year in power. Even the Prime Minister himself admits it (One year on, Dr M rates own Cabinet "five our of ten").

Even youngster Zaid Azmi could see it. In New Malaysia's not-so-happy birthday, the award-winning journalist says there have been too many broken promises:

While a myriad of reasons were touted to be the cause of PH’s unpopularity, the biggest root cause in which every single one of these outfit highlighted was the ruling coalition’s flip-flop in fulfilling its election manifestos, particularly its 100-day promises. At the moment, PH had only managed to fulfill four of the 12 hundred-days-promises and of the 555 promises, the coalition had, so far, fulfilled 23 which stand at a meagre four per cent completion rate. It has also, for now, broken 11 promises.


Outspoken journalist Boo Su-Lyn of the Malay Mail gave the new government a C in her May 3 Report Card: Pakatan's most memorable deeds in Year One. But she also thinks Dr M should immediately step down after today and let Anwar Ibrahim take over as PM, if only to restore political stability.

"There is no reason why Dr Mahathir should stay in office any longer".


The Old Man has other ideas, of course. He now hints at 3-year maximum stay as Malaysian PM, according to the Straits Times of Singapore.


PM Mahathir told a conference with the foreign media: "We will make most of the corrections within a period of two years, and after that I think the others will have less problems to face."
When pressed on whether he meant two years in power or from now, he replied: "I don't know whether it is three years or two years, but I am an interim prime minister."


So, in the interim, Happy Birthday Malaysia Baharu! 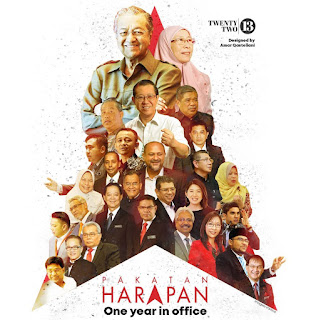