So, is it Hawana tomorrow? 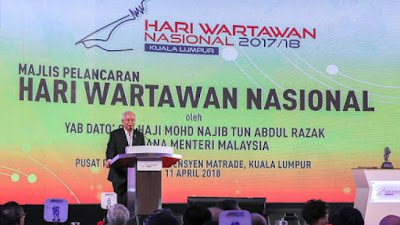 May 28: But it sure doesn't look or feel to me like anyone is celebrating the so-called Hawana [which is short for Hari Wartawan Nasional or National Journalists Day] tomorrow. Why not? I don't know. Has it been moved by the PH government to another day? I don't know. I asked several editors from the mainstream media, they also don't know.

The announcement on Hawana to be celebrated on May 29 starting this year was made by Najib Razak. He was the caretaker Prime Minister when he made the declaration last year (the event was held less than a month before the May 9 general election). Najib and Salleh Keruak, who was the Communications and Multimedia, are no longer in government so we can't ask them.

But some of the top journalists who were pushing for Hawana are still around. They should speak out. It is, after all, a noble idea ...

The following is the declaration issued in conjunction with the inaugural celebration of the National Journalists' Day (Hawana) 2017/2018 held today (April 11, 2018).
The declaration ... came about following discussions between the local media practitioners at a session held .. at the Exhibition and Convention Hall of the Malaysian External Trade Development Corporation (Matrade).

Declaration National Journalists' Day 2017/2018
We, journalists who strongly uphold the principles of Rukun Negara and Journalism Ethics, realise that on our shoulders lie the responsibility as one of the pillars of the practice of Democracy based on Constitutional Monarchy which had been practised since Independence by this beloved nation, Malaysia.
2. We accept as our main responsibility to create awareness on the people regarding the noble practice of democracy, to drive the involvement of every level of society in the development process towards progress and tolerance in preserving national peace and prosperity.
3. For the sake of our beloved Malaysia, we hereby pledge to continue to shoulder the task and trust with full responsibility and integrity. We hereby pledge:
i. We will implement the task of providing information to the people with purely truthful news based on crystal clear facts and data in full trust.
ii. We will fight all out any fake news created that jeopardised national peace, prosperity and sovereignty.
iii. We strongly uphold the Journalism Ethics, based on the Rukun Negara and Malaysian Constitution, uphold religious teachings and preserve social values and culture.
4. We are united and agreed to discuss the formation of the Malaysian Media Council to ensure that we constantly comply with and respect the rights of every Malaysian citizen as enshrined in the Federal Constitution throughout making news reports and coverage.
5. We are united and agreed to fix May 29 as the date for celebrating the National Journalists' Day each year. At the same time. this auspicious day will always remind us of the pledge that has been instilled in our hearts.
"Journalists Champion the Race, Build the Nation"