TTDI, Mar 1: PM-in-waiting Anwar Ibrahim's revelation about some money PAS leader Hadi Awang purportedly paid Claire Rewcastle Brown to get their lawsuit settled out of a London court stinks to high heavens of - if you're old enough to have witnessed - the old 80s and 90s politics of intrigues and last-minute disclosures before a major election.
I told a fellow journalist who's been covering the Semenyih by-election that what Anwar is doing is so typical of the dirty politics of old. I thought the "new" Anwar will be above it. I thought we had left all the "lapoks" in this Malaysia Baharu.
"Anwar and Clarie (Rewcastle Brown) may do as they wish, bro," my journalist friend said, sounding a little disinterested. I thought.
"Sure," I prodded, "but surely Hadi must respond to the RM1.4 million accusation and I suppose he would want to do it very close to midnight so that Anwar and Claire can't counter whatever he has to say." [The deadline for campaigning is midnight before the by-election day).
"No matter," the journo said. "The people of Semenyih have already decided who they are going to vote tomorrow".
Ah, they have?
Anwar's Pakatan Harapan is defending the seat, 9 months after winning it big at the 14th general election, following the death of the incumbent Bakhtiar Mohd Nor. PH, which is the ruling coalition, is fielding Muhammad Aiman Zainali, who is Bakhtiar's  son-in-law from Bersatu, the component party led by PM Dr Mahathir Mohamad.
Barisan Nasional, fresh from a crucial by-election victory in Cameron Highlands on Jan 26, is banking on 58-year old Zakariah Hanafi.
Hadi's PAS is not contesting the four-cornered by-election but is seen as the force that could help BN wrest the seat from Pakatan.
Early voting for this by-election starting last Tuesday (see story below) saw a 79 per cent voter turnout. 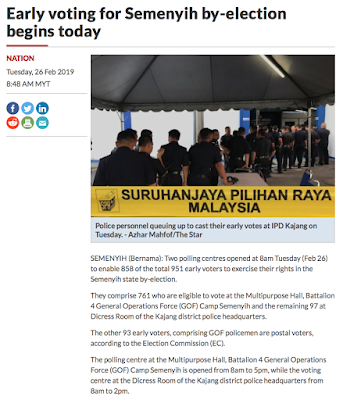 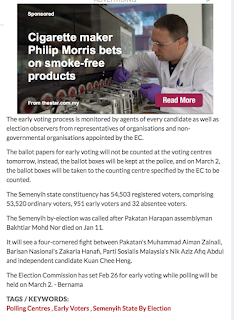