Sabotaging each other (updated: Wee tells Loke to sack aide)

Update 20/2: DAP persona non-grata Wee Choo Keong said Anthony Loke should kick out his press secretary over the RTM sabotage claim. In his tweet, the former MP blasted the PH Transport Minister for seemingly allowing his aide to smear the national broadcast station. "(If) complaint against RTM not  on (your) instruction, then sack your press secretary!" Wee said on Twitter.  Loke is unlikely to respond, given the history between Wee and his bosses the Lims. 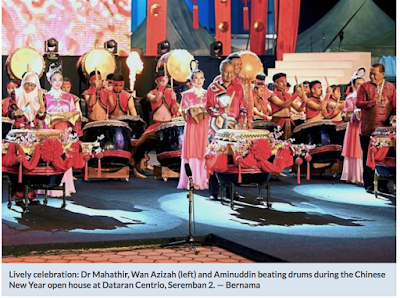 KL, 19 Feb: You've read about the clown who accused RTM of trying to "sabotage" his Minister [read Anthony Loke's press sec throws a fit after his boss' speech not broadcast]  and then Loke himself actually defending the press secretary [Transport Minister defends aide in RTM row, defends part omission of "live" event].

I thought to myself, what a joke! On twitter, I expanded that thought a little more:

I'm not quite sure about Loke now. I thought he was more level headed than this. RTM, sabotage? Just because you didn't get the coverage you wanted?

YB Gobind Singh Deo, the Minister in charge of RTM, should have quashed the allegation immediately. He sounded a bit rattled by all the drama made out by his DAP colleague Loke and, to be fair, he doesn't fully understand how RTM works, yet. "... I've asked RTM to let me know, in particular, when there was a request for them to cover the event and what the terms and standard operating procedures were. I think these are the things I have to look at before I can comment on it".  [Gobind wants RTM to explain missing speech]

It's actually quite simple, YBs.
It's Media Relations 101 ...
In any event officiated by the Prime Minister, the PM will be given precedence by the media. Often, the event itself is relegated to a single column in the newspaper or a few pitiful seconds on the news. In the case of the "live" event that brought about this sabotage drama, it was officiated not just by the PM but also the DPM. And there was also the MB of Negri Sembilan to boot. Not to mention "several Cabinet Ministers".
Imagine if RTM were to broadcast everyone's speeches and comments! Who's going to watch RTM?

Still not convinced?
Take a look at the pic used in the Gobind news article above. Bernama chose to focus on the PM, the DPM and the MB, No photograph of Loke. The caption also doesn't mention Loke or the other Cabinet Ministers.
So is your press secretary going to accuse Bernama of trying to sabotage you, YB Loke?

I hope YB Gobind will come to the defence of the editors and producers at RTM, Give the journalists leverage to do carry out their duties, without fear or favour, as this government has been espousing all the time.

It may be tempting to suggest again bringing in your own political appointee(s) in the name of ensuring there won't be any "sabotage" at RTM or Bernama in future, but that's going back to the old ways, Gobind, so please don't even think of it.

Your own colleague Latheefa Koya has tagged you: