27/7 2018: Having sacked thousands of so-called political appointees in the public sector, including heads of government-linked companies, Prime Minister Mahathir Mohamad said he "inherited a government lousy with corruption and with few trustworthy officials". He announced to the world: "Most of the top echelons in the government are corrupt". Those fellas at the CNN may find this a brutally frank and, perhaps, refreshing, admission from the leader of a Third World country. But we have heard this before. Quite often, too, especially towards the end of Dr M's original tenure as PM (1981-2003).

Once, when asked why he chose to retain some blatantly corrupt politicians as his Ministers, Mahathir quipped: "If I were to take action against them for corruption, I won't have a Cabinet left!"

We never failed to laugh at his witty response. It is funny, isn't it?

Praying for the blues, this Sunday 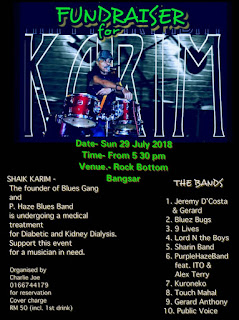 Message from the organisers:


"It hasn't been a good year for Blues fans as two co-founders of the Blues Gang suffered misfortunes. Jim passed on and we believe his soul is resting in peace in Heaven. Shaik Karim, is out with dialysis treatment.These two great musicians formed the rhythm of Blues Gang. Karim is also gifted with true blues vocals. We are sure that these two will be like a fish in a pond if asked to perform with any Blues Band in the world. "July 29 2018 is a Fund- Raising Night for Karim. Zzz Blues is urging all Blues fans to congregate at Rock Bottom from 5.30pm till late to help raise funds for Karim’s treatment."He has entertained many of us so let’s chip in for a good cause. See you on July 29 at Rock Bottom Bangsar. Thank you."


The above is not a fake posting from a fake account. Saiful Bahari Baharom is a real person, a graduate of Cornell, and quite a well-known figure in Malaysia's financial and political spheres. He was the one who told us about Mahathir's £65 million bank account in April, an accusation that the 93-year old Prime Minister has not commented on, as far as I know. If the 56 billion pound expose was sterling, we should find SSB's July 23 posting on how Zeti had allegedly lobbied for a project when she was the Bank Negara governor even more sensational.

Because Zeti is a member of Mahathir's Council of Eminent Persons, alongside the likes of Daim Zainuddin and Robert Kuok. Although the CEP has come under growing criticism and suspicion (read stories below) it remains influential. She is also the new Chairman of PNB, which had some RM279 billion in funds just before the May 9 general election which catapulted Zeti back into the national scene after a rather hurried and and unceremonious departure toward the tail end of Najib Razak's premiership.

Now, if Saiful Bahari Baharom is telling the truth about Zeti's lobbying and threats relating to a project for a company belonging to her family, she should not be where she is today, lording over our Malaysia Baharu. Okay, maybe she can still be on the CEP but certainly for the PNB we must demand a Chairman whiter than the white Abdul Wahid Omar.

Zeti must respond to the allegation to clear her name and, more importantly, to safeguard PNB's integrity. The Malaysian Anti-Corruption Commission (MACC) should move in, otherwise.


Read also, on Zeti's CEP:
Where was Wisma Putra during Daim's Beijing meets?
Govt not bound by CEP's decisions
CEP should be disbanded: KJ

A veteran kleptocrat, a dear friend of the Prime Minister's 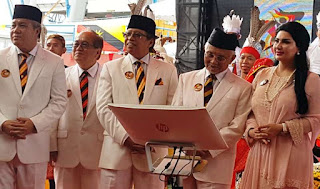 People like me remember that Sarawak Report, which attained gospel status (at least in the eyes of Opposition leaders and lackeys) after Malaysia's May 9 general election, was started only to go after Taib Mahmud, the former Sarawak chief minister and now its Governor. After the fall of Najib Razak, an emboldened Clare Rewcastle Brown, the high priestess behind this gospel portal, promised to renew her crusade against Taib. On May 21, in Change will come to Sarawak soon, the British citizen said "more stories (on Sarawak/Taib) would unfold". Regardless of the fact that Taib was Dr Mahathir Mohamad's close buddy.

In a nutshell, the article suggests a shady, even unholy, link between Petros, the Sarawak state oil company that is somehow embroiled in a post-GE tussle with national petroleum corporation Petronas, and a company called Southsea Energy controlled by Taib and one of his sons.

It also suggests that the current campaign in Sarawak to protect the interest of Sarawak (starting with its oil revenues) is "no more than a sham policy".

"There is nothing surprising to Sarawak watchers about what appears therefore to be emerging as a no more than a sham policy to ‘return Sarawak’s oil revenues’, when the priority appears to be to yet again provide the Taib family and its cronies a lucrative grip over the vaunted Petros project.

"For the entire past half century Taib has identified Sarawak’s interest as being what enriches him personally.

"It is not even surprising that the obedient former AG Gani Patail chose to ‘clear’ Taib back in 2013 when presented with an MACC report, much in the same way that his successor ‘cleared’ Najib."

Clare did take a swipe at Dr Mahathir (old habits die hard) and his administration:

"What is surprising is that the present government appears willing to tolerate this drift in events, as the supposedly failing Governor makes yet another grab at the riches of his state – old habits die hard."


The Sarawak Report's exclusive was clearly timed with Sarawak Day, which was yesterday, but it did little to tamper with the celebrations. There's an air of liberation and power about Sarawak these days. But there's also this rather disturbing article, though: No need for Sarawak to quit Malaysia (to pursue all its rights under the Malaysia Agreement 1963). The article quotes Chief Minister Abang Johari throughout but the accompanying photograph and caption are all about Taib Mahmud. The man Clare described as Malaysia's veteran kleptocrat is clearly very much in control.

LRT3 savings: Proof that Guan Eng is not from this planet

My heading should actually read "Yet another proof that Guan Eng is not from this planet".

After raising Malaysia's national debt to RM1.1 trillion from RM700 billion just days after being made the Finance Minister, which was the first sign  that he was not from here, Guan Eng has now "saved" billions and billions of ringgit for the taxpayers by slashing the cost of the LRT3 from RM31.6 billion to RM16.6 billion.
That's 47% savings, he screamed.
I wonder if someone has told him that he was just crapping on Malaysians again.
It would have been a savings IF the the LRT3 project's specs had remained unchanged (or have somehow improved). But in this case, the project's specs have been downscaled, and by a great deal, too!

+ Instead of 44 sets of trains with 6 cars each, the project will now be getting only 22 sets of trains with 3 cars each;
+ Lim will also shelve five stations to "save" costs and this means taxpayers around Lien Hoe, Temasya, Sirim, Bukit Raja and Bandar Botani will have to travel farther to the nearest LRT stations;
+ We taxpayers will also not get the 2-kilometre tunnel together with an underground station at Persiaran Hishamuddin, Shah Alam;
+ And, Einstein, because there will be fewer trains, the size of the depot will also be smaller lah; and
+ Istead of 2020, the new date of completion will be 2024.

So, still think those are "savings" for taxpayers? Uneducated taxpayers (and those from Lim's planet) may rejoice. But the truth is, this is not about savings at all. This is about scaling down the LRT3 project. A project meant to overcome transport woes of ordinary, hardworking and hard-pressed Malaysians has jsut been downgraded!