Daim with Mahathir for now but keeping his options ever open 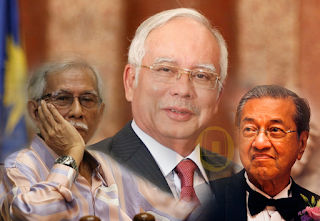 Daim Zainuddin has oratory skills not made for huge public rallies. But let him loose in a smaller forum, or a teh tarik session or a one-on-one interview and you'll feel that mind's razor sharpness.  And a keen sense of humour, too. In his super-lengthy interview with Chinese daily Nanyang Siang Pau, picked up here by my old paper The Malay Mail and quoted by the political blogger Annie today, Daim is extra careful with his choice of words. He may be tailing Mahathir Mohamad around on his Pakatan Harapan public rallies, but that's what you call loyalty. Dr Mahathir needs Daim's presence so Daim, no questions asked, avails himself.

You don't say no to the PM, remember? Never mind if he's just PM-designate!

But when asked who will emerge victorious in the country's 14th general election that takes place this Wednesday, Daim said he was at a loss. "I don't think anyone can know who will win. I can only say this is the most important election since Independence," he said.

I think that is Daim keeping his options open.

And that's why he's always ahead of the rest.

In this case, though, Daim may have lost a bit of his touch here and there. The blogger Annie felt that Daim totally misread the situation in Sabah and Johor.

"Come on la, it can't be 50:50 over there (in Sabah) .... after all the good stuff done of late for the state by BN and so many key ministers appointed from Sabah.
Sabah is the main love of BN now .... or maybe a close second to Sarawak.
And another thing about the Daim's prediction, I don't think it's 50:50 in Johor either.
Okay, there is going to be a tough fight but the way I see it the chances are more like 65:35 in BN's favour." - Daim's perdition prediction by Life of Annie

Me, as predicting the PRU14 goes, I think one thing I am sure of is that win or lose, Pakatan Harapan will descend into a bloody battlefield. Win or lose, leaders of DAP, PKR, Amanah and Pribumi will go for each other's throats in a political carnage that will be protracted and damaging. If Pakatan loses the GE, that damage would be limited to Pakatan and the four member parties and, perhaps, the states that they won in the election. But if Pakatan were somehow able to create an upset in the GE and defeat BN, the power struggle among themselves may put the whole nation at risk.

Someone may even decide that this guy shouldn't get out just yet ...