Updated:
Polling day for the seven general elections I'd covered as a journalist wasn't alway a Saturday, I've been told. GEs in 1995 and 1999, the ECs set polling days on Monday. 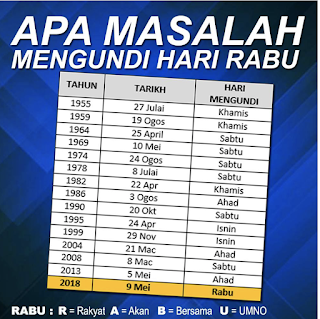 
I ain't complaining but I don't recall a general election being held on a Rabu (Wednesday). In all seven general elections that I've covered as a journalist, polling day was always a Saturday.

So Rabu suddenly reads, according to the Pakatan Hopers:

For the Barisan Nasional troopers, Rabu is:

Either way, the 14th GE is still about Umno, like it or not. The price you have to pay for being the longest-surviving political party in the world.

And as long as the long-suffering Opposition doesn't win it, Malaysia's general elections will continue to be considered - by the Opposition and some international media behind it -  unfair and rigged. Shocking but true.

KUALA LUMPUR: IF there is one thing that some Malaysians will have to put up with – while probably rolling their eyes – after the coming elections, is the seemingly inevitable scathing post-election discussions by foreign media and their own pro-opposition alternative media.


More so if the ruling coalition Barisan Nasional (BN) wins yet another one.
The thrashing over the integrity of Malaysia’s elections usually involves incessant mentioning of gerrymandering, abuse of institutional tools and fictitious phantom voters who, despite being widely reported, were somehow never caught.
In the 2013 contest the hammering went up up a few notches after BN won while receiving less total or popular votes – which was the first since Malaya had its first general elections in 1955 – against the now-defunct Pakatan Rakyat. 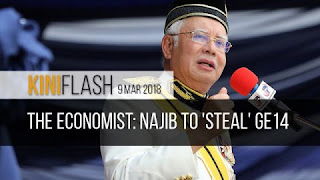 Read the full article by Zaidi Azmi:  Flawed Malaysian electoral system? Look West, please.
Read also:
Democracy redelienated, re-redelienated and reviewed by Anak Si Hamid
Will the next election be won on misinformation by Dave Avran
They want to lead, but they lack ideology and credibility by Aziz Hassan
GE 14 will be the dirtiest elections ever and this is why by Seademon