At her height, Rafidah Aziz was feared by many. Her staff would not dare look her in the eye and those civil servants, no matter how senior, had better known their stuff if they wish to avoid public shaming. I've witnessed her mercilessly put down the country's high-flying trade commissioners for purportedly not doing enough in their host countries. She would clash with Madeleine Albright and anyone else who'd come in her way (including, briefly, ex-boss Mahathir Mohamad). So she was not known as Malaysia's Iron Lady for nothing. Rafidah revelled in that role.

But that was 20 year ago. Today, she still itches for a fight. Just earlier this month, she told a seasoned Cabinet minister to "jump into the lake". And during a recent diving expedition in a neighbouring country, she apparently tracked down a yacht wanted by US authorities and after that she became the No 1 critic of the 1MDB. But in cyberspace, where there are countless warriors, she is just another warrior. And the fear factor is no longer there.

A fellow Facebooker, tired of Rafidah's rantings, declared on April 25 that .. "She may have been the iron lady some time ago but ... she is more like the scrap metal lady to me". 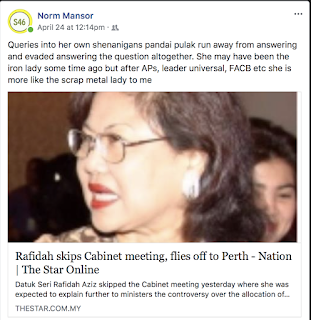 Not good. Not good at all. But courtesy of the 1MDB boss Arul Kanda, himself, Rafidah has a chance to prove she's no scrap metal. All she needs to do is accept his invitation.

“It is unfortunate that Tan Sri Rafidah Aziz is making statements without understanding the legal intricacies of the matter.
“Having said that, with the utmost respect, I would humbly request that she attend one of the open sessions we are holding around the country on 1MDB matters.


“She is welcome to raise questions during the Q&A sessions and InshaAllah, we can all benefit from an open and mature exchange of views.” - Arul Kanda on Rafidah in Arul schools Rafidah on Equanimity episode

Personally, I hope Rafidah would surprise the likes of Norm Mansor and the rest of us by turning up at1MDB's next road tour session. At the very least, she may inspire the Opposition leaders after Arul Kanda slams Opposition for no show at his 1MDB talk in Subang