Cock-up over a yacht 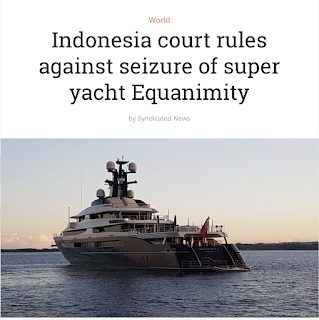 Basically, the judge in this case, Justice Ratmoho has ruled the Equanimity seizure in Indonesian waters last Feb "invalid" and "without legal basis". What this means is that the Indonesian authorities and the US Federal Bureau of Investigation, which made the high-profiled seizure of the yacht in a joint ops, screwed up big time. We don't know who screwed up who but that's for the Indonesian police and the FBI to sort out.

Our immediate concern is, what else could those people have screwed up in this investigation?

The DOJ had wanted people to believe the yacht was among "assets" bought using some US$4.5 billion allegedly siphoned off from Malaysia's 1MDB funds. This despite the 1MDB itself having repeatedly said that it had not lost any money. The other day in Muar, Johor, during a 1MDB briefing by Arul Kanda, YB Razali Ibrahim mentioned  the yacht. "They claimed they had found this yacht that belonged to us (1MDB, Malaysia, the Malaysian people, blah blah blah). How could they possibly find something of ours that we didn't lose in the first place?"

Mr Ratmoho probably shares such a sentiment when making the ruling against the FBI and the local police on the seizure. He said there was no court ruling that the owner of the yacht had committed a crime. "If there is no crime, there should not be any confiscation," he said.

Rafidah Aziz, currently the biggest critic of all things in the country, was one of those people who made such a fuss when the FBI and the Indonesians seized the yacht. Read her If I could find the Equanimity, why couldn't Malaysian authorities?