Umno's Letter to The Editor of Malaysiakini you ought to read


Updated 22/3:
Shahril Hamdan: Zombie
Well, you can't please everybody. Commenter RD also ridiculed Shahril for not addressing the 1MDB affair or at the very least mention that name Jho Lo in his letter. To me that shows how focussed Shahril is but if you guys are really interested, still, after all the explanations and after all these years, listen again to what PAC deputy chairman YB Tan Seng Ghiaw said about 1MDB and PM Najib Razak after the Commission's lengthy investigation into the 1MDB affair.

Original airtcleHere's why the unpolished gems in Umno should be allowed to come out more often to air their views. This letter to the editor published by the Malaysiakini penned by Shahril Hamdan is an excellent read, someone who does not care much for Umno told me. I blogged about the 31-year old exco member of Umno Youth once (The day Syed Saddiq made a name for his opponent, Sept 2017). Dira Abu Zahar is the other "star" in Puteri Umno who came out, seemingly out of nowhere, to shine.

There are more, if BN chairman Najib Razak is interested to field younger candidates at the GE14. But quite a number of the old ones don't want to go ...

Mahathir is doing all this for Malaysia, right? 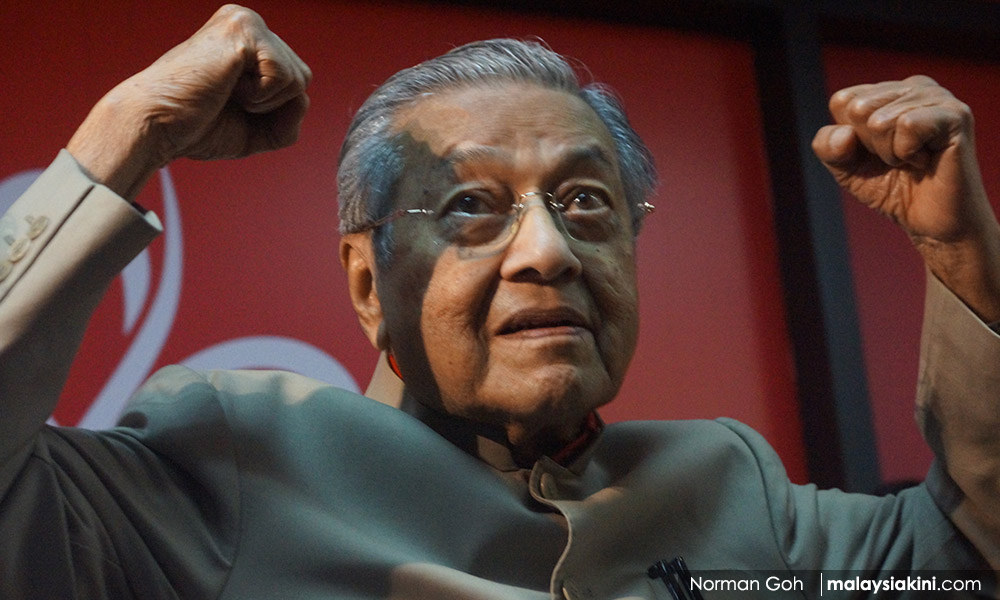 COMMENT | I refer to the Malaysiakini article titled Mukhriz: Dad threw a fit when Umno tried to field me in election.
I find Mukhriz Mahathir's claim that his father, Dr Mahathir Mohamad threw a fit when Umno tried to field him as a candidate in the 1999 general election most amusing.
For starters, the late 1990s is now subject to some pretty extreme historical revisionism by Mahathir.
So I wouldn't put much stock in what he says he did or did not do in that period, since the versions change dramatically every so often.
But if we are on the subject of Mahathir throwing fits, the public should also be aware of the metaphorical one he had in more recent memory - when his son lost the bid to become one of the three Umno vice-presidents.
Might it be coincidental that, at that moment too, Mahathir stepped up his attacks against Umno and the prime minister personally?
If one didn't know better, one might say that Mahathir took his son's loss as a personal affront by Najib Abdul Razak, whom he perceived to have helped the three incumbents retain their spot.
If one didn't know better, one might find this perception ironic, considering the iron grip Mahathir himself had on Umno in his decades as president - deciding who wins what seat where and when.
The master craftsman
If one didn't know better, one might assume that Mahathir was further affronted by the fact that one particular person, Khairy Jamaluddin, did in fact very publicly campaign for Hishammuddin Hussein to the clear electoral detriment of Mukhriz in that close contest for the third VP spot.
If one didn't know better, one might say that Mahathir never got over the fact that after so many years of trying to “end” Khairy, the guy just wouldn't go gently into the good night.
But instead, he had the nerve to try, and then succeed, in defeating Mukhriz in the 2009 contest for Umno Youth chief.
If one didn't know better, one might say this latest intervention about stopping his son contesting as a candidate in 1999 is vintage Mahathir, acting out the concerned, principled, elderly statesman routine that belies the master craftsman of a politician he actually is.
He who uses everything at his disposal and pulls every emotional string at the most opportune times to secure what he truly wants – an unassailable legacy, Lee Kuan Yew style.
Alas, I guess we in BN ought to know better. Because surely Mahathir would not have the audacity to quit the party, rejoin and then quit again, form a new one, eat his own words, make countless bewildering U-turns on everything and culminate in signing off on a manifesto that essentially seeks to undo his own policies in office - for his own personal gain.
Surely we ought to know better. This has nothing to do with his narrow agenda or vendetta. He's just not that type of person, right? He's doing this for Malaysia, right?
SHAHRIL HAMDAN is an Umno Youth exco member.