Owh, so the Felda board knew all along?

Jan 10: By the end of their Day 3 today, the external auditors investigating Felda's on-going KL Vertical City project on the Jalan Semarak land (that was reportedly "lost", here) would have discovered that, contrary to some newspaper reports, the Board of Directors of Felda was fully aware of the multi-billion ringgit project, details of the land transfer, and the benefits and future income the project would bring.

According to The Mole (Felda land deal profitable, board had full knowledge) the Felda board met three times between 2014 and 2015 to endorse the deals between Felda subsidiary FIC and local Bumi firm Synergy Promenade Sdn Bhd, the master developer of the KLVC.

Construction on the KLVC started in 2016. 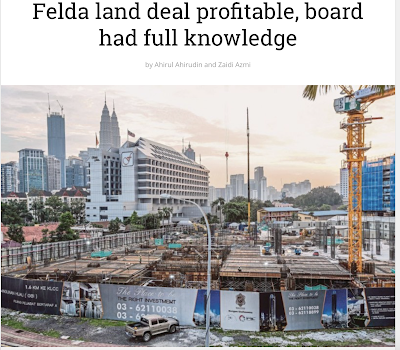 KUALA LUMPUR – January 9, 2018: There’s another twist to the Felda Jalan Semarak land deal, with the latest information suggesting that the previous board members were fully aware of the deal between Felda Investment Corporation (FIC) and Synergy Promenade Sdn. Bhd. (SPSB).
On at least three occasions in 2014 and 2015, some among the Felda board who were also on the FIC board had met and endorsed the deal which promised the agency a minimum return of RM500 million.
The deal hogged the limelight after the Berita Harian last month published a report suggesting that the project to build the KL Vertical City there reeks of corruption.
According to the daily newspaper, all decisions pertaining to the June 2014 deal were made by FIC without the knowledge of Felda’s directors until they were informed about it in September of that year.
However, a source with intimate knowledge of the deal told The Mole today that the Felda board had endorsed it on the very day they were officially informed about the deal and then re-endorsed it on June 3, 2015.
The Felda board members then were Datuk Dr. Omar Salim, Datuk Seri Dr. Rahamat Bivi Yusoff, Datuk Norzirah Bahari, Datuk Mohd. Suhaili Said, Datuk Noor Ehsanuddin Mohd. Harun Narrashid, Datuk Abu Bakar Harun, Datuk Mohd. Khusairi Abdul Talib, Datuk Mohd. Isa Abu Kasim, Datuk Mohd. Emir Mavani Abdullah and Shamsudin Othman.
Ever since the Berita Harian report, Felda chairman Tan Sri Shahrir Abdul Samad has been pulling out all the stops to undo the deal although SPSB is said to have not found to have committed any breach of contract.
The source pointed out that the FIC-SPSB agreement was drafted in such a way that it is practically irrevocable, unless SPSB has breached it.
The exact wordings of the conditions for a breach are as follows:
“The parties hereto agree that FIC shall be entitled to terminate this agreement in the event the master developer fails and/or omits and/or neglects to complete the said project within ten years from the date of the first development order and the land conversion to the category of land use commercial, whichever is later.”
It is understood that Shahrir’s unhappiness stemmed from several seemingly lopsided conditions in the agreement which could result in Felda losing the land following the decision by the previous Felda and FIC boards to give SPSB  full power of attorney over the land.
While he did not discount the possibility of taking civil action against SPSB, Prime Minister Datuk Seri Najib Razak had late last month stated that the reports about Felda losing the land were inaccurate.
But Najib has also instructed an external audit firm to carry out a forensic audit on the project.
The Malaysian Anti-Corruption Commission (MACC) had also said that it found that the deal had no element of corruption.
Shahrir had portrayed the deal as a total loss for Felda but according to the source, FIC in fact is set to gain at least half a billion ringgit from it.
The source quoted the minutes of the 10th FIC board meeting on April 29, 2014, as such: “It was resolved that the company (FIC) do hereby accept the offer by SPSB on the proposed minimum guaranteed return (MGR) of RM500 million or 10 per cent of the gross development value, whichever is higher.
“The first payment of RM10 million being part of the MGR shall be paid within one month from the date of signing of the property development agreement.”
The estimated value of the land is RM200 million.