IF Mahathir Mohamad becomes the next Prime Minister of Malaysia, one thing for sure is he won't hog the post for another 22 years. But the Tun will not let the post go to Anwar Ibrahim, either. Over his dead body, to quote the late Karpal Singh.

One commenter on the social media was congratulating supporters of Barisan Nasional right after Pakatan Harapan confirmed that Mahathir will be their PM if they win the next general election. "That decision has just confirmed BN's victory in the GE14," said the commenter. I have to say that I didn't think they'd ever let Mahathir, the man who had inflicted so much pain on the Opposition for so long, back into power. Proof that they don't have a credible candidate. Or just glutton for punishment.

I shall say no more. But some of these guys on this poster, who became staunch supporters of the Opposition mainly or partly because of Mahathir when he was PM for 22 years until 2003, will have some interesting things to say this Thursday about their PM-designate. 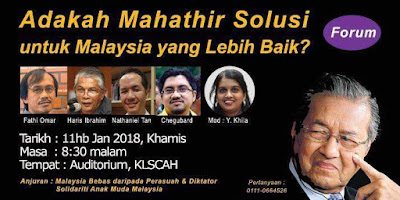 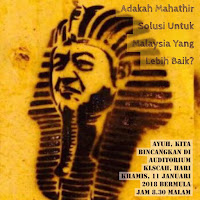