"I was misunderstood," said man who had claimed on Facebook that: "Only in Malaysia Muslims are taught to hate and claim Islam is the only true religion and no other religions must be practised ...".

"I was merely referring to the quality of foreign preachers, like Zakir Naik, who seem to be welcomed with open arms whereas moderate and sensible ones are detained and barred from entering," he said when contacted yesterday by the mole.my h e r e. 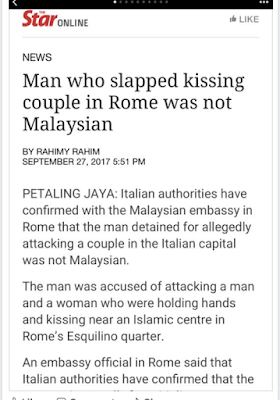 Gardens KL, 28 Sept: The mistake was made by an Italian news portal, not The Star [read the original new story h e r e].  The Star had merely quoted that news portal and, upon realising its mistake, quickly carried a correction/clarification, like all decent newspapers do (see above and link h e r e]. Seasoned journalist Nuraina Samad got that in her posting this morning: 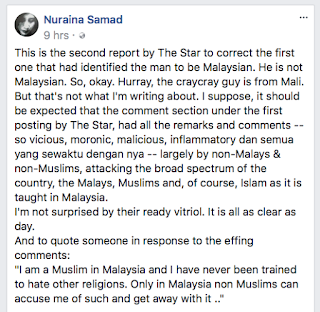 Thanks to the error in reporting, we realise that "vicious, moronic, malicious, inflammatory" individuals STILL live among us. Like Nuraina, I am not surprised by their ready vitriol. What hurts, though, is some of those who readily attacked Muslims in Malaysia because of this slapping incident in Rome wrote this "long-term opinion": 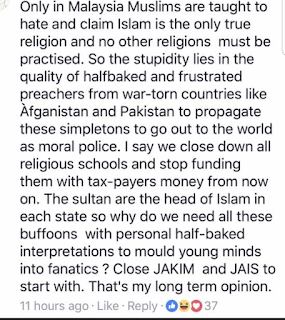 I don't know what long-term opinion means but I wish he had given it a longer consideration before commenting on a report. This dude later blamed it on the "error" committed by The Star and I'm not surprised. It is always someone else's fault, never their own stupidity.

I left these comments on his FB:

I am a Muslim in Malaysia and I have never been trained to hate other religions. Only in Malaysia non Muslims can accuse me of such and get away with it ..