Kuala Lumpur, 18 Aug: Of Isa Samad, I've written on this blog too many times, none of them with great fondness. But when photographs of this ex-Negri Sembilan Menteri Besar, ex-Felda-FGV Chairman, ex- Umno Vice President, and soon probably ex-SPAD acting Chairman splashed the front pages of the local dailies middle this week, clad in the unmistakable orange pyjamas of SPRM (the Malaysian Anti-Corruption Commission), I hesitated in making a posting.  The pomp and the parade ... there's something not right about the whole thing. Lawyer N. Surendran, who is also a Member of Parliament, may have a moral point here. It is not just humiliating but premature to dress Isa in that bright orange uniform and paraded him in front of the media as if he had been charged and found guilty. When, in fact, you were just producing the suspect in court for a remand order to question him further on suspicion of corrupt practices.


This is not to say that the blazer Isa had on when he was arrested by the anti-graft officers was less of an eye-sore! A sober, dark suit or batik or a Baju Melayu complete with songkok would probably have done better for his PR.

I fully agree with YB Rais Yatim, the seasoned politician from Jelebu, about the need for hemah or discretion on the part of the MACC in upholding the dignity of every person they deal with: 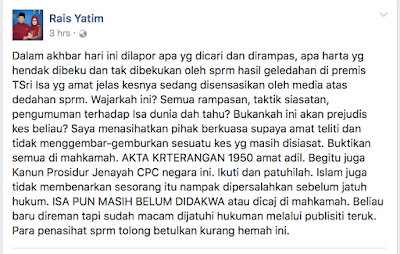 Rarely, I am also with Akhbar Satar, the Transparency Insternational-Malaysia  president. Let Justice Takes Its Course. But the first person who should listen to his advice is Akhbar himself.  One minute he says we must always bear in mind that Isa is innocent until proven guilty. The next minute, he proclaims that Isa's arrest is a signal for the government to End political appointments in GLCs. Akhbar, moronically or not, has already found Isa guilty!

Sometimes I think Akhbar is no different from some Opposition politicians who would go out of their way to discredit MACC whenever one of theirs is taken into custody for alleged corruption is expected. To them, the Commission is doing their job only if others, preferably their political rivals, are involved. It's the childishness in these politicians that we've come to expect and which is holding the MACC back. When it suits them, they hail themselves as "friends of MACC".