The Pujut shocker: So now anyone - even a foreigner - can be Malaysian ADUN?

Bangsar, 17 June: The blogger Life of Annie's nonchalance towards the latest DOJ's shocker Part 2 (pls read Couldn't care less) didn't shock me, really. I think it describes, more or less, what Malaysians in general feel about the antics involving the US Department of Justice and the enemies on both political sides of the political divide (pro-Najib, pro-Tun). Malaysians hope that the DOJ does not drag its sloppy feet any longer and proceed with the promised legal battle between the US Government and Jho Lo & Reza Aziz. So we can all get on wth our lives. Amiin.

As for now, the real shocker to Malaysians is the court ruling in favour of Pujut assemblyman, who allegedly is, in effect, an Australian. 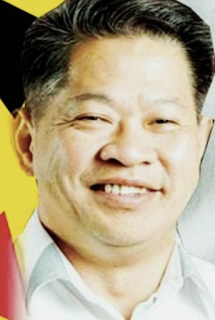 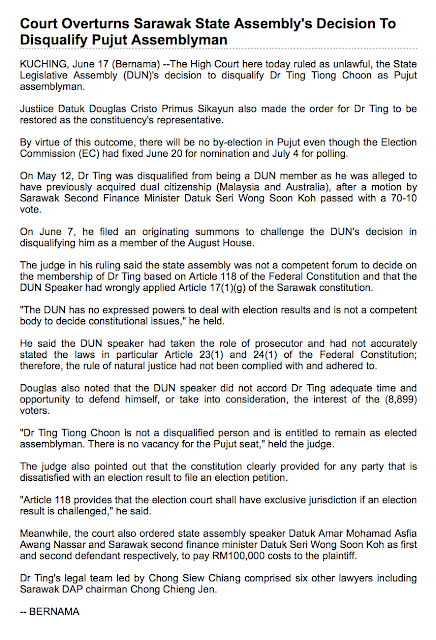 So does the court ruling mean that anyone, even a Malaysian who holds the citizenship of another country, can stand for election in Malaysia and go on to become an Assemblyman or a Member of Parliament?
Does it mean a Malaysian can have dual citizenship?

So the law on this is quite clear.
Where the Sarawak state assembly Speaker might have erred, or so said the judge in the Pujut case, is that in disqualifying the Pujut assemblyman, the Speaker was exercising a power that was not his to begin with!
The BH story on the court ruling Dr Ting Tiong Choon Kekal Adun Pujut clearly quoted the Justice Dougas Cristo Primus Sikayun on who the powers belong to:

Yes, the authority over matters related to citizenship lies with the Federal Government.

So if I were Dr Ting Tiong Choon, I put off the celebrations ...