And an invitation to the IPD ...

Puchong, June 1: The very day this blog turned 11 yesterday, I got a call in the morning from the Royal Malaysian Police. There has been a police report lodged against this blog so the police are obliged to start an investigation, the Inspector tells me. I understand a hundred percent, Inspector.

Since starting Rocky's Bru on 31 May 2006, I've gotten my share of summons to police stations in and around Kuala Lumpur. The police and the MCMC have also paid me a visit at home and my office to check out my apparatus. A Minister was among those who have lodged police reports against what I wrote. And there was also that lawsuit that dragged for five years, the first in the world between a newspaper company against a blogger, or something like that.

But I do hope my meeting with the Inspector next week would be a cordial one and would not lead to lawsuits. 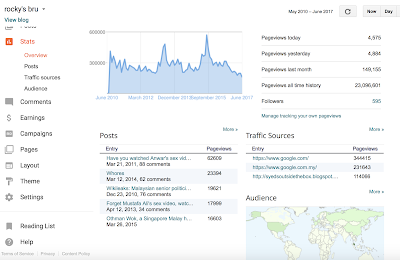 ... during those 11 years, this blog drew 23 million pageviews, some 3 million of these coming in during the last 12 months, during which I did about 100 postings, which I must say is not very productive of me.

On the other hand, you, my Dear Readers, have been far more industrious: this blog has published over 137, 000 of readers' comments since 31 May 2006, whether or not I like them. Lately, those who oppose my views outnumber the supporters, but to agree to disagree is something that's always a given. 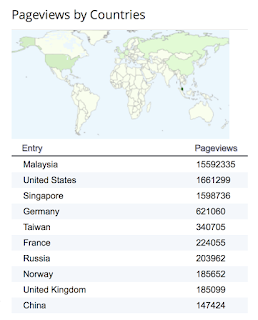 I expect the coming months to keep me far busier (and more productive), especially with the 14th general election on the horizon. As always, I so look forward to your continuous support/opposition and readership.