Puchong, 12 June: Nazri Aziz's tourism tax may well be good for the industry. Especially for Sarawak and Sabah, as claimed. So all the Tourism Minister needed to do was to convince the industry and the people that it is so.
But Nazri, as we all know, can be so incapable of the easiest of tasks. His belligerent response to the Sarawak Tourism Minister's request to defer the July 1 implementation of the tax is the latest example of this serious handicap.
And it's going to haunt him, the Tourism Board, and last but not least, his boss the Prime Minister.

Because the Sarawakians, sweet and friendly as they are, can be belligerent if you disrespect them. In fact, anyone would.

And Sarawakians are not just taking Nazri to task on the social media. Their Chief Minister has issued a formal statement, too: 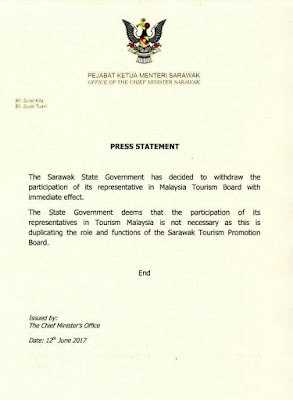 KUCHING: The state government has decided to withdraw Sarawak’s sole representative in the Malaysia Tourism Board with immediate effect.
"The state government deems that the participation of its representative in Tourism Malaysia is not necessary, as (it duplicates) the role and functions of the Sarawak Tourism Board," the Chief Minister's Office said in a statement today.
The abrupt move comes amidst a nasty spat between Tourism and Culture Minister Datuk Seri Nazri Aziz and Datuk Abdul Karim Rahman Hamzah, the state minister in charge of Tourism, over the new tourism tax.
Nazri recently explained that collections from the new tax will be distributed to all states, including Sarawak.
Nazri also labelled Karim “inexperienced” and a “young minister” for raising concerns over the tax, and reminded the latter that there are "bigger gangsters" than he.
His remarks triggered the wrath of netizens as well as Sarawak Barisan Nasional leaders, who described his statements as "harsh", "uncalled for" and “immature.”

So out of the window the Federal government's RM654.62 million tax shall go, I reckon. Unless Nazri says sorry, I don't see how Sarawak would go along with the proposed measure. And then we can all imagine how the Sabahans will react.

In the end, Najib Razak will have to step in, once again. Like he had to with FGV, in order to try and undo Isa Samad and Zakaria Arshad's mess. Like he is doing with Prasarana re the GLC's inability ti maintain and operate our public transit systems.