Latest: According to reliable sources, the expelled Kang Choi is booked on a 6:25 flight out of KLIA. Technically, he would have to board his flight at 5.55pm, which is 5 minutes before the deadline given to him to leave Malaysia. 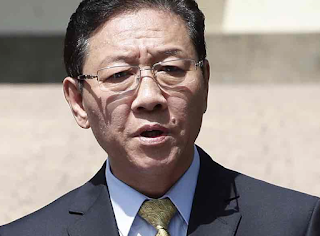 Bangsar, 6 March: Malaysia's expulsion of North Korean envoy to the country, Mr Kang Choi (pic), is mega, mega news in the West. The Europeans and the Americans didn't expect KL to be so bold. I didn't either, to be honest. Re-reading Foreign Minister Anifah Aman's press statement still sends a chill down my spine. A sovereign nation resorts to such a measure only under extreme conditions. Pyongyang gave PM Najib Razak, his DPM and Home Minister Ahmad Zahid Hamidi and Anifah very little choice but to say, in no uncertain terms, not to mess with us.

Under Dr Mahathir Mohamad, Malaysia expelled the former Yugoslavia ambassador to KL following the genocide against Bosnia-Herzegovina during the early Nineties.  That marked the start of what was to be one of Malaysia's most important international campaigns. Both Abdullah Ahmad Badawi and Najib Razak, who would succeed Mahathir,  played key roles in the campaign as Foreign and Defence ministers, respectively.

I was the New Straits Times correspondent in London when Malaysia was making its  mark on the Balkan war in the 1990s. It felt good to be Malaysian.

Wisma Putra's decision over the weekend to review ties with Pyongyang is so bold that it brings back "that loving feeling". Some Malaysians bitch and whine about the bad press they said the killing of the North Korean brought Malaysia (trajidi as one seasoned journalist would call it). My view is that it has redefined us as a sovereign nation.

I'm not the only one looking at these three brave leaders in a different light ...