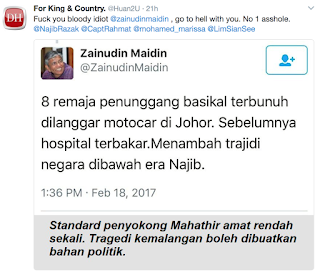 KL Feb 20: I bumped into a senior editor from Utusan Malaysia this afternoon and asked him what he thought about his former editor-in-chief's tweet on the 3am accident in Johor Baru that killed eight young ones.
"We don't understand him anymore, Rocky. He's gone bonkers."
The editor said he spoke for his colleagues in Utusan Malaysia.
"It is disgraceful, really," he added.
Zam, who turned politician from journalist towards the end of Dr Mahathir Mohamad's rule, wrote under pressure in later tweets that he hadn't lost his marbles, that he was merely stating the facts, ands that government cybertroopres were desperate. He wasn't even blaming Najib Razak for the tragedy, he insisted.
But that's not how everybody else read/interpreted Zam's tweets. And the senior editor I bumped into today wasn't the only Utusan Malaysia journalist who was offended by Zam's words and conduct.

Then a reporter from the news portal Malaysian Digest called me up for my comments. Damn. I was hoping I didn't have to comment on what Zam had written on his Twitter but  a fellow journalist is a asking me what I thought of Zam's tweets?
Well, to put it simply, and speaking as journalist, I was ashamed.
This is the recipient of the 2006 Tokoh Wartawan Negara (Eminent Journalist) award that we are talking about, I told the Digest.

p.s.  In 2006, I remember forcing myself to refrain from writing on my blog about the manner the award had been given to Zam back then. Maybe I shouldn't have  ..
at February 20, 2017