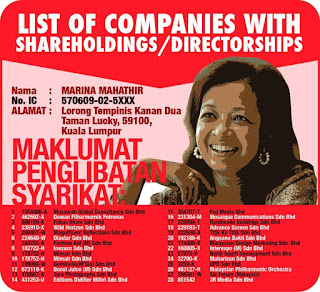 
Marina Mahathir was curt, defensive when a reporter from The Mole, the news portal that I help run, contacted her for her comments on an info sheet of her business "empire" that was going viral.

"Why don't you go check for yourself with ROC, or wherever?"

Actually, one look at the list of her "empire" and I could tell that a lot of the info on the sheet was dated. If it was a spin aimed at discrediting Mahathir Mohamad's sons and daughter, it was rather amateurish.

In 1998, Mahathir did an excellent number on Anwar Ibrahim when the deputy tried to mount a coup on him at the Umno's general assembly that year: the Old Man made public a long list of company directors to show that there were more Anwar cronies than Mahathir cronies in Umno!  This one on Marina and her brothers attempts to take a leaf from that Mahathir classic. But, at best, a poor attempt. So Marina should chill; not everyone's trying to get her.