KL, Mon: YB Rafizi Ramli is an example of a young, reckless politician. A legend in his own mind who rose too fast for his own good. When you look back at his meteoric rise, you will sooner or later wonder how he got to be where he is so fast. What were his contributions to society, or to his peers, or to his neighboruhood before he was elected to represent the people in Parliament? And how did he manage to get himself in trouble again and again with the law, the same law that lawmakers like him are supposed to uphold? Ignorance? Foolhardiness? Stupidity?

Rafizi did say he would not be surprised if the Court found him guilty of breaching the Official Secrets Act. Well, the truth is many of us are not surprised., either.

And mind you, the courts that found Rafizi guilty today aren't the same as the ones during the Mahathir era, and the judges today are viewed by many of us as rather anti-Establishment or even pro-Opposition (allegedly, of course; in other words, they are quite fair lah).

In fact, that's a good reason to smile. We shouldn't be surprised if he wins his appeal, if you know what I mean ... 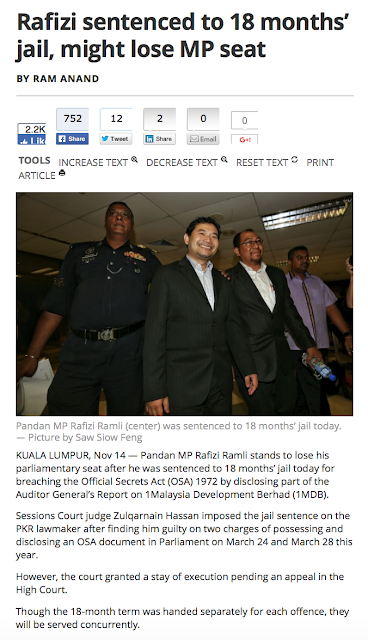