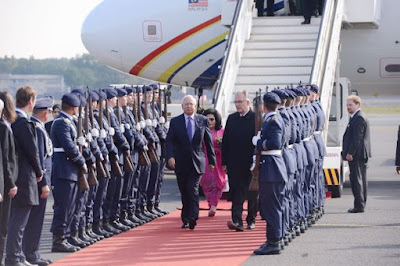 28 Sept 2016: In Berlin, contrary to what Reuters reported, Najib Razak did not say he would not call for an early general election. An aide of the PM said Najib was asked, after his meeting with the German Chancellor, if he would be calling for an early election in Malaysia in view of issues surrounding the 1MDB. Najib said the question of election is not due to any single factor.

"It must be predicated on the basis that we have good policies in Malaysia, We are delivering for the benefit of the people and we are the best government to lead Malaysia into the future.
"We have a strong record and we will continue to tell the Malaysian people that our government is still the best choice."

The Reuter's report (PM says Malaysia will cooperate with the US on 1MDB investigations, Channel News Asia) was picked up by The Star (No need for early polls, says Najib) and the Malay Mail Online (Najib: No polls before 2018), among others.

In conclusion, therefore, Najib may still call for an early general election. If he asks me, I would suggest about this time in 2017 would be a good time to have an election...

Much adoi about nothing over Zahid's English

Reuter's misreporting goes on to prove that the English language is NOT an easy language to use, comprehend let alone master!

So I read some of the condescending views about Deputy Prime Minister Zahid Hamidi's English at the UN General Assembly and I had a good laugh! Some of these critics couldn't even construct a proper, short sentence in English. I imagine many of them speak the language with an American slang, which they picked up from TV.

We should all work on our English but I wouldn't worry too much about it if I were Zahid. The DPM is one of the most eloquent speakers of the Bahasa Malaysia and his Arabic, I hear, is quite good. And when he speaks Javanese, wadduh wadduh ...!

Some of the world's major leaders don't even speak the English language. To me, what's more important for Zahid, as a leader, is the content of his message and the wisdom of his words. And most of all, for him to walk his talk.
at September 28, 2016