"... the Prime Minister has always maintained, if any wrongdoing is proven, the law will be enforced without exception.” - Najib Razak's press secretary, in his response to the US Department of Justice's 1MDB announcement

Puchong, 21 July: Some people must have stayed up all night to celebrate their "victory" over Prime Minister Najib Razak after the US Department of Justice announcement on 1MDB last night. I don't know if they rejoice prematurely but I know that these people will be rolling-on-the-ground unhappy if Najib is NOT found guilty by America of the crimes THEY (these rejoicing people) have accused him of committing! Already, they are whining the fact that the US DoJ has failed to name Najib Razak specifically in its damning 136-page report. How sweet it would have been if the DoJ had spelled out Najib's name. Well, I don't understand that bit, either, but that's the fact of the matter that we must remember: Najib's name is not there.

The name of his stepson, Reza Aziz, is. Well, if one's hand was in the cookie jar, one has got to pay. Without exception, as the PM has said.

The people at 1MDB, obviously, had to sacrifice some sleep last night to respond to the situation. So did the PM's press secretary and the Communications Minister Salleh Said Keruak. [Read 1MDB, the government will cooperate with US Department of Justice, the Mole].

"1MDB highlights that it is not a party to the civil suit, does not have any assets in the United States of America, nor has it benefitted from the various transactions described in the civil suit. Furthermore, 1MDB has not been contacted by the US Department of Justice or any other foreign agency in relation to their investigations". - exceprts of 1MDB's official response to the DoJ

We can expect the people who rejoice to manipulate the DoJ's statement for some political gain. YB Tony Pua has already started his campaign on Twitter. The aim is to make as many people as possible to believe in what the DoJ DID NOT say ... 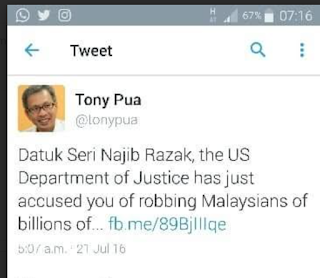 Not all armchair critics think Najib should be losing too much sleep over the DoJ's move, though. 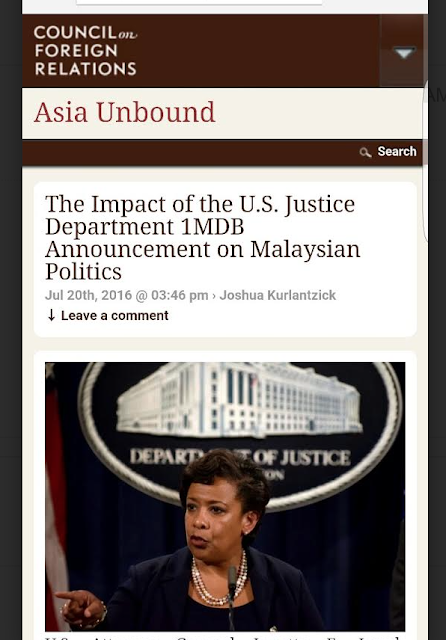 I could write a six hundred word blog before getting to the point here, but I will get right to it: The 1MDB asset seizure is likely to have minimal impact on Malaysian domestic politics. To recap … the U.S. Justice Department this morning announced it was filing “civil-forfeiture complaints against more than $1 billion of assets allegedly acquired using funds misappropriated from a Malaysian economic development fund,” known as 1MDB, according to the Wall Street Journal, which has extensively covered the 1MDB saga. This is believed to be the largest asset seizure in U.S. history, and the Justice Department has targeted a wide range of purportedly 1MDB-related assets that were supposedly bought with misappropriated money from the state fund—classy art, a private jet, the rights to the movie “The Wolf of Wall Street,” luxury real estate in New York and Los Angeles, and more. It’s an impressive list of potential seizures, and an important case showing the power of the Justice Department’s Kleptocracy Asset Recovery Initiative. Expect authorities in other countries that are still investigating 1MDB, like Singapore and Switzerland, to eventually make other demands for asset recovery.
But as for the impact on domestic Malaysian politics? Don’t expect the case to lead the Malaysian government to fold, the way that investigations of FIFA triggered reforms in that institution. The impact on the administration of Najib Tun Razak will be virtually none. Yes, Attorney General Loretta Lynch said at a press conference today that, “Unfortunately and tragically, a number of corrupt officials treated this public trust as a personal bank account.” Yes, Prime Minister Najib Tun Razak is believed to be the “Malaysian Official 1,”—which the New York Times says is a “high-ranking government official who oversaw the fund and is a close relative of Mr. Aziz,” Najib’s stepson, who was one of the people served with complaints by the Justice Department. Yes, the perception within Malaysia (and probably globally) is that Najib played a central role in 1MDB’s funny business, his denials to the contrary. Yes, Najib is probably very unpopular with urban Malaysians, although no poll has been taken in recent months that quantifies his support—or lack thereof—in urban areas. Yes, Najib and his family are perceived by many Malaysians to live lavishly, with little evidence of where the money comes from.
But Najib also has proven a masterful and tough politician throughout the 1MDB scandal, and Malaysia’s opposition, which was close to winning parliament in 2013, has fallen apart even as the 1MDB investigations mushroom. Over the past two years, Najib has overseen a dramatic crackdown on civil society, forcing or prompting the closure of several independent media outlets, overseeing a suspicious sodomy case that put Anwar Ibrahim back in jail, and presiding over the arrests of many other civil society leaders on vague sedition charges. He has purged the governing coalition of opponents and stacked his cabinet and the Malaysian bureaucracy with loyalists. He has installed as his top deputy a man, Ahmad Zahid Hamdi, even less liked by both members of United Malays National Organization (UMNO) and younger Malaysians; his deputy serves basically as a kind of insurance against getting rid of Najib.
Meanwhile, the opposition coalition—if it can be called that now—has fragmented with Anwar in jail, the government cracking down on civil society, and fissures emerging among the parties that made up the 2013 coalition. It was always a coalition held together with scotch tape, but last year the Parti Islam Se-Malaysia (PAS), the Islamist party, left. It had long argued with other members of the coalition over social issues, including whether state and federal governments could implement Islamic law on a range of criminal issues. The new coalition that has emerged, which includes some small remnants of PAS, is weaker; it lost two by-elections to the ruling coalition in Selangor and Perak in June.
Anti-Najib politicians and civil society activists are in such disarray that some belatedly have come around to seeing former Prime Minister Mahathir Mohamad as their champion. Mahathir, who is 91 and was hardly known for his democratic style as prime minister, has indeed been harshly critical of Najib for more than a year now, and has derided the prime minister over 1MDB. Now, Mahathir says he is forming a new party to reinvigorate Malaysian politics. He probably will populate with some leading critics who were fired from Najib’s cabinet and other senior levels of UMNO. It’s not likely to restore Malaysia’s opposition to the level of being able to challenge, nationwide, for control of parliament.
Read also
Swiss AG: Najib not a suspect in our 1MDB probe, Mkini 1 Feb 2016;