Haven't the voters in Kuala Kangsar and Sungai Besar heard about 1MDB/RM2.6 billion?!

Of course they knew of 1MDB and the donation. And of Arul Kanda, too. The voters heard almost nothing else from the Opposition leaders in the last few weeks. But they were fed with so much dedak (sweets, candies, bribes) that they had no choice but to vote the BN candidates. Heh. That's what those sore losers keep saying, anyway.
Me, I think Najib Razak's emphatic victories in Sarawak and now Kuala Kangsar and Sg Besar are simply because the people could see that the BN has gotten more organised despite the economic and political pressures. The people always want a strong government and sure-footed leaders. The Opposition, sad to say, is in a disarray (again). Only this time we are looking at the beginning of a severe disintegration. Tun Dr Mahathir Mohamad's de facto leadership in the Pakatan Harapan is partly the reason for things falling apart, you like it or not. And know what? 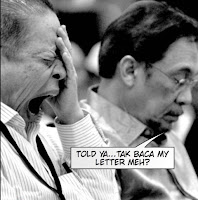 Things will get messier as the other de facto leader, Datuk Seri Anwar Ibrahim, takes on Dr M from behind bars to once again try and save the Opposition from total annihilation in the next General Elections ... which may happen sooner than all of you expect.
I like how the Mole's young journo, Zaidi Azmi, sums things up: "What BN did was that, it went back to its roots and did things the old fashion way, things that the multiracial coalition was good at."  (See article pasted below). For a more brutal take of the two elections and recent political events,  I'd recommend Seademon's On a Suicide Watch.  - Rocky's Bru

Kuala Lumpur, 19 June: The special thing about by-elections in rural constituencies is that, everyone practically knows everyone.

That means poo flinging, no matter how politely the thrower may hurls it, will never be welcomed.

With that being the case, being nice and to be perceived as such was crucial, especially in a close-knit constituency such as Sungai Besar. 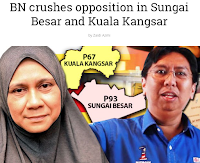 Such a factor, when coupled with the BN’s winnable candidate who is famous among the locals is definitely the reason why Budiman Mohd Zohdi won the by-election.

In fact, Budiman won by a whooping majority of 9, 191 which was a stark contrast to the previous razor-thin majority of 399 that BN had won in the last general election.

BN had apparently opted for the same electoral blueprint used by Sarawak BN; which was basically focused at solving local issues, staying away from hate politics and being nice to the locals.

Even Umno vice-president Datuk Seri Hishammuddin said that he did not expect that such a template to work exceptionally well at the by-election because the Sarawak election was supposed to be a different ballgame.

“But it did. Even the Chinese came back to us…there is definitely a trend to this and BN will study it thoroughly,” he said at a press conference after the announcement of Budiman’s victory.

However, to simply say that the Peninsular BN had copied Sarawak BN was, perhaps, a tad inaccurate.

But the science behind BN’s landslide victory was not exactly in need of a rocket scientist to explain.

What BN did was that, it went back to its roots and did things the old fashion way, things that the multiracial coalition was good at.

And what BN has always been really good at, was taking care the well-being of the kampung folks.

So the overwhelming victory in Sungai Besar, Kuala Kangsar and Sarawak should serve as a stern reminder to BN that if it keeps on doing what it does best, good things will happen, one way or another.

With that being said, it does not mean that the opposition was entirely no good at all.
During the start of the campaigning period in Sungai Besar, Pas and Amanah did not immediately resort to hate mongering.

But somewhere along the way…tasteless racist billboards were erected by DAP who even openly admitted that it was them who put it up.

The act was so frowned upon to the point that even Amanah claimed that it has nothing to do with the insidious billboards.

Meanwhile, Pas who had been playing it cool since the start of the campaigning period, eventually lost its patience with Amanah antics.

And towards the end of the period, the two parties had been trading barbs with one another.

Pas members joked that Amanah had ripped off a Tamil-based television station’s logo and that the orange shirt they don resembled the shrouds worn by Budhist.

Amanah retaliated by saying that at least its members does not wear “nightgowns”, which was a snide reference to the Arabic robe commonly worn by the Islamist party’s members and leaders.

As the seemingly ceaseless feud between the two continued, BN on the other hand, spent its last few campaigning days wooing the Chinese voters, particularly those in Sekinchan.

And what had probably won BN a significant number of their votes was no doubt, the well-coordinated rescue of the two local Chinese fishermen who were recently arrested at sea by the Indonesian authorities.

Apparently, the Chinese community knew when to call a spade a spade and that good deeds beget good deeds in return.

And what better way to reward a political party than to do it via the ballot box.