What was 1MDB's crime, again?

Bangsar, 7 April
Last week, 1MDB's boss Arul Kanda announced that "my work is done here". That, apparently, was the signal for the Board of Directors of the most maligned government-linked fund in history to offer today their collective resignation. Their job, too, is done here. In the days and weeks ahead, heads will roll. That is, if crimes had, indeed, been committed.

That, I've heard, has always been Mr Fixit's plan: complete the rationalisation program, bow out with dignity, and help the investigators go after the culprits (if the investigations show that there's wrong-doing). In that order.

That Arul has managed to accomplish his mission so well under such unprecedented pressure from within and outside speaks volumes of the former investment banker's mettle. In such a short time, he's made some formidable enemies (among themTun Dr Mahathir Mohamad and Pakatan's Tony Pua and Rafizi Ramli, all of whom must have thought initially that Arul was going to be a pushover) but Arul, I'm sure, has also won admiration for giving up a lucrative job and a promising future overseas to try and help his country resolve the national headache that was 1MDB.

It is now clear that the RM42 billion didn't vanish from the Fund.
That the 1MDB had nothing to do with the RM2.6 billion "donation" to PM Najib Razak.
That No taxpayer money had been lost.

Or so said the PAC in its much-awaited report: 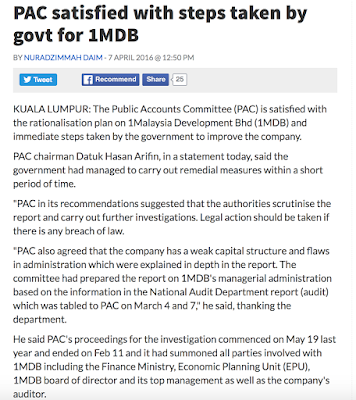 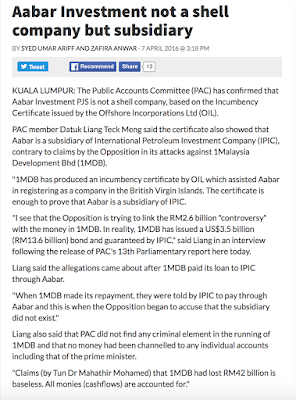 p.s I say Arul and his Board should be allowed to resign in peace. They've earned it. They need to move on. And if there's a case to probe further as blogger A. Kadir Jasin says, let the probe happen  ASAP [Ada kes: PAC arah siasat]. I believe Arul and his Board would want that more than anyone!