The straw that broke Dr Mahathir's back

Pak Lah benefits from "Najib's abuses"
The Petronas advisor's post has traditionally been a retirement post for former PMs, that's true. But one can't help but wonder if this isn't Najib Razak rubbing salt to Dr Mahathir's injury, especially following the Tun's claim in his lawsuit that his removal as the Petronas advisor is example of what makes him a victim of "Najib's abuses".

In the end it isn't 1MDB's "vanished" RM42 billion or Altantuya's murder or her murderer's "unfair" death sentence or the "wasteful" BR1M scheme or the "suspicious" RM2.6 billion donation in Najib Razak's account that drove former Prime Minister Dr Mahathir Mohamad to file a lawsuit against the Prime Minister, the subject of his ire for the last 18 months or so. It was his sacking as Petronas advisor that made him do something he never, ever did before.

If it wasn't clear before, now everyone can see: it has become personal. 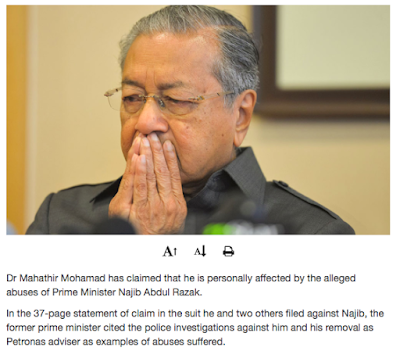 For the full story, subscribe to Malaysiakini h e r e. I've yet to renew my subscribption so I can't cut and paste the whole article here.

NOTE: Dear Readers, I won't ask you to register yourselves but please note that I don't accept comments by Anonymous anymore. For me to publish your comments, simply give yourselves pseudonyms like xnakdedak or nakdedak or, if you are brave and bold enough, use your real/true ID.