If lawmakers don't give a damn, why should we? (Is this statement seditious?)

Taman Tun, 31 March:
Read about the pregnant Australian woman who was sentenced to 10 months jail by a Singapore court for sedition last week? 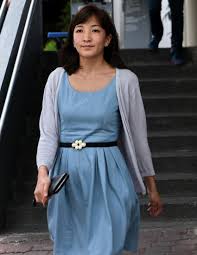 Bangkok: An Australian woman who is eight weeks pregnant has been sentenced to 10 months' jail on charges of publishing seditious articles in Singapore, the stiffest sentence ever imposed for the offence in the city-state.
Ai Takagi, a 23-year-old Australian of Japanese descent from Brisbane, apologised to the people of Singapore for the harm she had caused for posting comments on her popular website The Real Singapore.
"I know that the harmony which Singapore enjoys today requires careful and continuous efforts on the part of everyone, citizens and visitors alike, to maintain," Takagi told a court on Wednesday, according to the Straits Times.

That's the difference between Singapore and us. We have more or less the same laws but they are not hesitant about upholding them, even if the whole wide world calls them barbaric or draconian. They are not afraid to use them on anybody, politicians or bloggers, foreigners or locals., to "maintain the harmony", as Ai Takagi acknowledged belatedly.

Over here, a politician can leak official secrets to all and sundry, lie through their teeth and show the middle finger to the supposedly feared BAFIA and nobody dares to take any action. Lawmakers don't give a damn and we expect the citizens to be law-abiding? 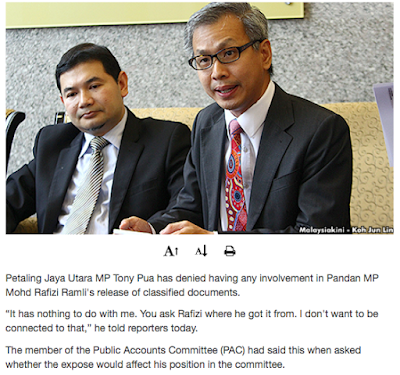 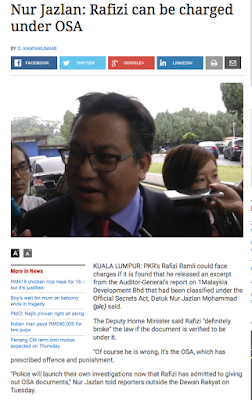 Stop Interfering with the PAC
1MDB understands that YB Rafizi Ramli has lodged a police report against 1MDB senior management. 1MDB confirms that its senior management will fully cooperate with any investigation that may be deemed necessary by the police.
YB Rafizi claims that he has publicly revealed classified information subject to the Official Secrets Act (OSA). If what YB Rafizi has done is true, then this blatant breach of the law is shocking to say the least, and worse, coming from a Parliamentarian.
The matters YB Rafizi claims to "expose" are part of an ongoing investigation by the Public Accounts Committee, a lawful select committee of Parliament, with 5 opposition members. There is no need for rabble-rousing Rafizi to sensationalise what is already being investigated and even less need to blatantly break the law in doing so.
1MDB has consistently maintained that if any wrongdoing is found, then action must be taken according to the law. We accordingly reiterate 1MDB's commitment to fully cooperate with all lawful authorities in their investigations.


"That's the difference between Singapore and us. We have more or less the same laws but they are not hesitant about upholding them, even if the whole wide world calls them barbaric or draconian. They are not afraid to use them on anybody, politicians or bloggers, foreigners or locals., to "maintain the harmony".

And you're right (for once!)

Malaysia does have two sets of laws. The Sedition Act being a classic case.

Drop a balloon or draw a cartoon, get arrested.

And yet these people roam free:

a) The offensive comments by Perkosa about the Hindu temple in Klang, report made over a year ago, no action.

b) The person involved in the burning of an effigy of Father Lawrence Andrew, no action.

c) The anti-Christian seminar at UITM, case closed, no action.

f) The famous Shukri Defence (that does not even exist in law), to cover Ibrahim Ali's Bible-burning threat.

g) The charges against lawyers, academics and journalists, merely for legal opinions or fair comment.

No balaclavas, no remand, no 20 cops, no 3 a.m. raid, no kidnapping in the street, no charge, no action, nothing.

On the same day that Najis claimed that the Sedition Act was "not for repressing government critics", this happened:

That's right: for questioning Permata expenditure, an MP was hauled up for sedition.

Who's going to argue with that?


"Lawmakers don't give a damn and we expect the citizens to be law-abiding?"

Phulamak Saudara Rocky, you're right twice in one day!

For example, you can bet 100% that in cases like Yapeim, MARA, the 100 million Sports Ministry, etc etc till the end of time, there will be no action taken against Lawmakers.

The infamous Cow-Condo Lawmaker does not give a damn, because one secret letter from that nice Indian lawyer to the nice 24-hour replacement A-G, and all charges were dropped before the trial commences, and despite the fact the both the HC and CA held earlier that there WAS a case to answer.

With "safety nets" like this, why should Lawmakers give a damn?

Certainly not the MP for Pekan, who appears to have told quite a significant number of lies (as we can now see) about the movement of money in and out of BSI Bank Singapore.

Who gives a damn?

Wonder what Tun Razak would have said?

If in doubt, always resort to desperate use of Komplot Yahudi, as Tajuddin Songlap ITM Tapah has done.

Of course, this hatred of Jews does not prevent some folks from paying the Jewish APCO no less than RM77 million to polish their "image", or working with Jewish Goldman Sachs to pay hundreds of millions over the normal market rate for bond commissions.

Does Tajuddin Detik Utuh have any comment on those?


"If lawmakers don't give a damn, why should we?"

Watch this elegant bit of cuci tangan from mulut berbuih:

And of course KJ will cuci tangan too.

But lawmakers don't give a damn, right?

What about Utusan Malaysia? Or Perkasa? Or that Ali Tinju guy?

They have exemptions, is it?

the case between Malaysia & S'pore is different, our prime minister is said to be involved in money laundering, bribery etc . . u can charge people like rafizi and tony under OSA/ SOSMA or whatever but PLEASE stand up & answer the question . . if u are right just sue them, take the case to the court..just sue WSJ for the "donation" scandal.. but Najib early statement said "tak da terima " then tukar " for fight IS" tukar lagi statement "untuk UMNO menang pilihan raya" and then tukar2 lagi..somemore the donation value has going up ..but he still keeps his silence.

So there are some truth of what WSJ had reported about Nazir receiving millions from big big brother.
And since Dato Rocky did not mention about that grand shopping spree by the millions, I guess it must have been true too.