Puchong, Feb 16
Bakke Salleh, reputedly straight as an arrow, the man hailed by the DAP as a hero because he quit as 1MDB chairman pruportedly under protest, was supposed to be the one to send 1MDB and PM Najib Razak to hell when it was time for him to speak out. Bakke was destined to be a legend.
That's what the anti-Najib folks have also been telling us, anyway.
Well, the PAC interviewed Bakke on Feb 11 as part of an-going investigation into the `1MDB. Bakke, who has been the Sime Darby big boss since 2010, was one of the last ones called to give his testimony to the PAC. While we are not privy to what transpired during the interview, we now know what certainly did not: 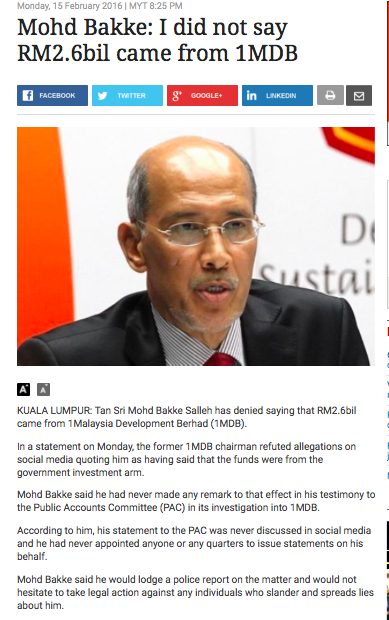 Before poor Bakke's strong denial, the anti-1MDB/Najib folks had been happily lapping this up like fools:

Prominent pro-Umno bloggers Bujai and Dr Novandri think the Red Bean Army, a gang of cybertroopers on the DAP's payroll, are behind the fake news that's obviously aimed at influencing public perception towards 1MDB and the Najib Administration.
Maybe, maybe not.
And we'll never know if the authorities concerned continue to fail miserably to combat this kind of cyber corruption. If you ask me, I say the MCMC has got to step up its game and go after the unscrupulous and cowardly people who have been creating and spreadling such lies on our social media. If the current crop of people at MCMC can't do it, easy, change the whole lot! 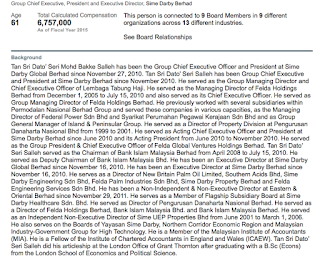 Important Reminder:
If you wish to comment, Dear Readers,
LEAVE A NICKNAME, A MONIKER, A PEN NAME .. OR DON'T LEAVE A COMMENT AT ALL!
Better still, leave your own real name when leaving comments. What are we afraid of?
at February 16, 2016