Why I won't thump Noh Omar for "defending" Tony Pua

Updated: Just as Noh Omar may have feared, Pua is trying to wriggle out of the live debate that he had asked for in the first place [see article below, h e r e]. I hope Arul will be kind enough to let him keep his PAC post so that Pua will have no more excuses but to let the debate happen. 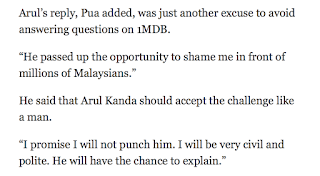 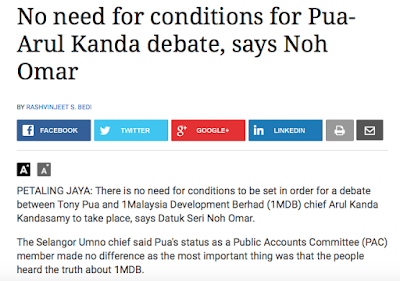 At first I felt like thumping Noh Omar for speaking "for" YB Tony Pua h e r e. Because I happen to agree with the majority view that if Pua wanted a debate with Arul Kanda, he should stop wearing the PAC hat and take on the 1MDB man on a level playing field. Otherwise, Pua should wait for the PAC to formally interrogate Arul. He can't have his cake and eat it too.

But then a pal pointed out to me that Noh had made that "no conditions" statement because the UMNO man feared that Pua would just use that as an excuse to get out of the debate. "Noh Omar tak mahu Tony cabut lari, bro," he said.

The debate has turned out to be a trap Pua had laid for himself, so it seems. The DAP man had challenged Arul to the debate thinking that the 1MDB chief would cower in fear. But Arul, who had said he'd face anyone on 1MDB, didn't even blink an eyelid (Arul to Pua: Challenge accepted). Arul only asked that Pua quits his PAC post (by virtue that PAC is investigating 1MDB) so that Malaysians get a good, clean fight.

RTM has said it will broadcast debate live. Even the staunchest 1MDB-Arul critics are looking at Arul in a slightly different light after he'd accepted Pua's duel wihout flinching: I sense a bit more regards for the underdog here.

Those who know Arul know that the man is no chicken. He's not just bald, he's bold and brave. And he's got the credentials. The RMC boy has dealt with the most powerful men in the world, men whose wealth will make Ananda Krishnan look like a crony. Pua is 1MDB's longest critic (since 2011, at least) but not the most effective. The 1MDB issue only gained traction after Tun Dr Mahathir Mohamad picked it up early this year to lead his campaign to oust Prime Minister Najib Razak.

Arul didn't join the 1MDB until 2015 so he doesn't give a hoot to what happened before his time. He's said that he will not try and defend any wrong doing if there was any between 2009 and 2014. It is going to be very difficult for Pua to try and pin this guy down in an open debate, especially with millions watching

In other words, I think Pua had made a mistake in challenging Arul to the debate. But since the challenge has been accepted, Pua would be forever seen as a coward if he backs out now. For party and comrades, Pua has to get into the ring. Only this time, and for once, he doesn't get to play judge, jury and executioner.