Saying things stupid: Time for Jay to watch his mouth, too 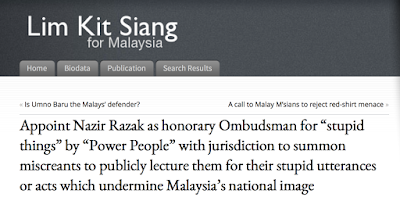 Actually, it's easy to say clever things these days. You hit out at the government and run down PM Najib Razak, you'll be hailed by some people as clever. Brilliant, even. Whack the 1MDB or anyone/anything that has something to do with 1MDB and you won't go wrong, even if you don't know your facts or don't even bother to read the explanations by the 1MDB management and the government.

One person who's been saying a great deal of such clever things would be Nazir Razak, the Prime Minister's youngest brother.  Lim Kit Siang certainly want you to think so even if you don't. So much so, the DAP's grand old man has suggested in his latest posting that Najib appoints Nazir to lead an Ombudsman to take to task Cabinet Ministers for saying stupid things.

"Imagine Ministers like Zahid, Abdul Rahman Dahlan, Madzir, Ismail Sabri, Salleh Said Keruak, Azalina and Shabery Cheek getting a public tongue-lashing from Nazir, which I think is probably the best antidote to get them to reduce their quota of “stupid” utterances and statements." - Lim Kit Siang

Not such a clever suggestion but that's beside the point, of course.. We know that Kit Siang is merely taking the opportunity that has availed itself to bring Nazir and his PM brother and the cabinet ministers/Umno leaders at loggerheads.

Clever or stupid, Nazir really should watch what he's saying. After all, he's one of the "power people", whether he likes it or not. And power people say the darndest things!

Further to the announcement issued yesterday by 1MDB on this matter, we regret to note that today, third parties such as Datuk Seri Nazir Razak, who have no direct knowledge of the facts, are issuing speculative opinions on certain statements made on 7 September 2015 by Tan Sri Samad Alias, a former member of the 1MDB Board of Advisors.

1MDB can confirm that our President and Group Executive Director, Arul Kanda, personally met Tan Sri Samad in January and March 2015 to discuss the company's affairs. Amongst other information, Arul Kanda shared with Tan Sri Samad details of the 1MDB strategic review and rationalisation plan. This included a slide presentation which showed the extent of future debt and interest obligations of the company, and a discussion on proposals to address the key issues facing the company.

It is, however, important to 1MDB that we properly address the concerns raised by Tan Sri Samad. In addition to regularly issuing public updates on the progress of the 1MDB rationalisation plan, the 1MDB Board of Directors has today sent a letter to Tan Sri Samad to seek a meeting with him to discuss and clarify any outstanding concerns. We further reiterate our appreciation to Tan Sri Samad for his earlier input and support of the company.

* The headline above is mine, the statement issued by 1MDB earlier today.

"... Nazir should analyse the facts, history and do a bit of homework first before exercising his skill of the gift of the gab. Otherwise, it makes him lesser of a professional and closer to become a politician."- More than meets the eye by Big Dog, 8/5