Oh dear, look at how Malaysia fares in money laundering!

17/9/2015: Just for your post-Merah/Marah/Maruah Rally reading pressure, now that the haze is back and since some Malaysians want others to believe that we, Malaysia, are a safe haven for money laundering ... 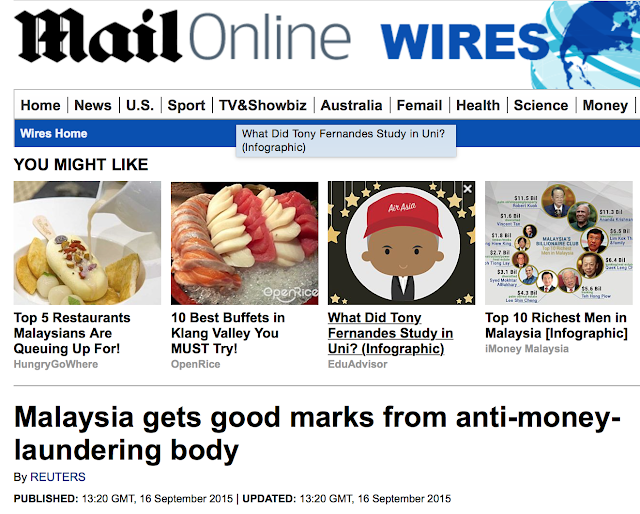 By By Mark Hosenball

ZURICH, Sept 16 (Reuters) - While Malaysia's premier faces tough questions over the origin of hundreds of millions of dollars transferred to his bank accounts, the country has tentatively received good grades for its anti-money-laundering efforts from a team of international experts, documents reviewed by Reuters show.

But it said the Asian country needed to be more effective in targeting high-risk offences and needs to pay more attention to transnational crime.

The draft, dated Aug. 4 and marked for official use, said the FATF inspection team found the Malaysian government had a "strong political commitment and well functioning coordination structures" to fight money laundering and that "significant resources have been allocated" to investigations in this field.

The FATF report, which is yet to be made public and could be subject to changes, comes as a high-profile financial scandal is undermining Malaysia's political stability and has hit its currency, the ringgit.

A spokeswoman for FATF declined to comment. The Malaysian Prime Minister's Office had no immediate comment on the draft report.

FATF experts routinely visit member countries and those aspiring to become members to assess their efforts in combating money laundering.

Malaysia has "privileged observer" status in FATF and is keen to be admitted to full membership, a FATF source told Reuters.

But countries cannot qualify as full members unless they have put robust checks and balances in place.
FATF circulated a draft of its assessment on Malaysia to members who attended a plenary meeting held in Brisbane, Australia, in late June, according to a participant in the meeting.

Malaysia's anti-corruption agency has said the funds moved to Najib's accounts were a donation from an unidentified Middle East donor, and did not come from 1MDB.

Najib, who is also the country's finance minister and chairman of 1MDB's advisory board, has denied taking any money for personal gain, saying corruption allegations are part of a malicious campaign to force him out of office.

But pressure on him continues to mount after Swiss authorities said on Sept. 2 they had frozen funds in Swiss banks amid investigations into corruption and money laundering related to 1MDB.

In its report, FATF said Malaysia has up-to-date anti-money-laundering laws and a "well-structured inter-agency cooperation framework", and that it disseminates "good quality financial intelligence" to a range of law enforcement agencies.

It also said that Malaysia has been very successful in confiscating assets to combat tax evasion and goods smuggling.

The report does offer some reservations regarding Malaysia's performance, noting that while its apparatus for conducting investigations and prosecutions is generally sound, the country had "produced minimal outcomes" and was "not effectively targeting its high risk offences."

To date Malaysia had not prosecuted any cases related to the financing of terrorism, the report added. (Additional reporting by Praveen Menon; Editing by Lisa Jucca and Edmund Klamann)