Oh no, where's our Ringgit?!


19/8 DAMNED! The Ringgit is NOT even on this list of "troubled currencies" at all! Our naysayers, of course, will find it very hard to accept the exclusion of the Ringgit in Morgan Stanley's latest Troubled Ten Currencies. But Morgan Stanley was right about their Fragile Five currencies before! 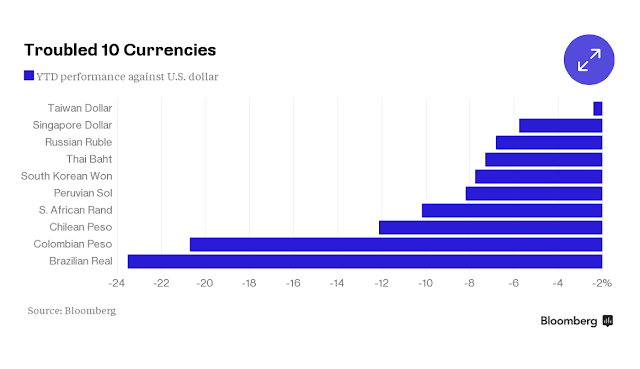 FORGET the “Fragile Five.” These days, strategists at Morgan Stanley are worried about what could be called the “Troubled Ten.”
That’s how many nations they say are particularly at risk since China devalued the yuan. While the analysts haven’t used the term themselves, it’s as good a description as any for the currencies -- from the Brazilian real to Peru’s sol and South Korea’s won -- which have trading ties making them susceptible to a slowdown in the world’s second-biggest economy.
“It’s all about vulnerability,” said Hans Redeker, the London-based global head of foreign-exchange strategy at Morgan Stanley. “Major victims of the policy change this time are currencies of countries with high export exposure and export competitiveness with China.”
Morgan Stanley was right about the Fragile Five. Those currencies include four of the developing world’s eight worst performers since the phrase was coined in 2013. The real, together with Turkey’s lira, South Africa’s rand, the Indian rupee and Indonesian rupiah, have suffered as rising global interest rates make it more difficult for the countries to finance their current-account deficits. 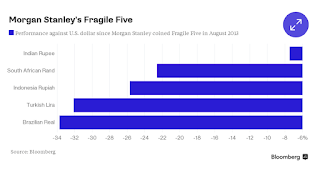 For Redeker, the biggest challenge now is a lack of global growth. While central banks in Japan, Europe and the U.S. have rolled out record stimulus, the world’s economy will expand at the slowest pace since 2009 this year, according to International Monetary Fund forecasts.
That “lukewarm” recovery means China won’t be able to rely on exports to drive expansion, said the strategist, whose firm was the second-highest ranked forecaster of the dollar versus the yuan, according to data compiled by Bloomberg for the four quarters ended June 30. In turn, the slower growth will also put China’s trading partners in the crosshairs.
There’s some overlap between the Fragile Five and the new at-risk list, with the rand and real to be found in both. Also vulnerable to China’s slowdown are the Thai baht, the Singapore and Taiwan dollars, the Chilean and Colombian pesos, Russia’s ruble and the won and the sol, according to Redeker.
China is the top export destination for most of the countries on the troubled 10 list, data compiled by Bloomberg show. The nation accounted for 37 percent of South Africa’s exports and 30 percent of South Korea’s in 2014.
Investors were jolted last week as China implemented the biggest depreciation of the yuan since 1994, raising concern that authorities plan to use a lower exchange rate to shore up the weakest growth in more two decades.

The move rippled through global markets, weakening the currencies of the Asian countries that compete with China for exports and sending developing-nation stocks into a bear market. A Bloomberg index tracking major emerging-market currencies, already under pressure from slowing growth and a slump in commodity prices, fell 0.9 percent last week to a record low.
“The move by China has introduced further concerns on foreign-exchange valuations in emerging markets,” said Chris Chapman, a London-based fixed-income trader at Manulife Asset Management, which oversees $302 billion. “We have reduced our EM positions over time as the risk-reward profiles have changed, and will continue to monitor.”
Even with the yuan roiling markets, investors still see the Federal Reserve sticking to its plan to raise interest rates for the first time in nine years, threatening to lure capital away from emerging markets. Futures contracts show traders see a 75 percent chance the U.S. central bank will move by year-end.
It will take a sizable fiscal package to boost China’s economy and reverse the selloff in emerging markets, according to Redeker -- and it’s not clear that will be forthcoming.
“The biggest concern is that we are not going to turn the corner and the economic performance in China will continue to disappoint,” he said. “Investors will watch China data closely and trade the yuan accordingly.” - Bloomberg Business, 17 Aug

"And to strengthen this allegation there are even efforts to attack the Ringgit to ‘prove’ that the world has totally lost confidence in Malaysia. The picture being presented is that a lower Ringgit means that Malaysia is headed for doom. "

Read SSK's Malaysia is facing an economic sabotage
at August 19, 2015