The Attorney-General has issued the following press statement which in a nutshell says that a special task force comprising the Police, Anti-Corruption Commission and the Central Bank has started investigation into the allegations made by WSJ and that raids on the companies mentioned in the article had been carried out and relevant documents seized. 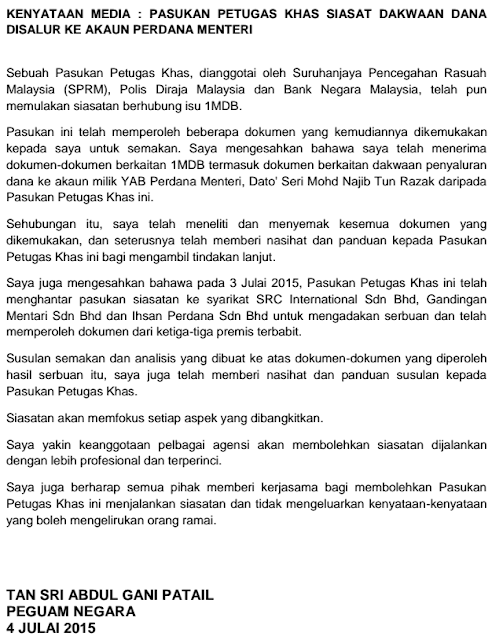 Updated: The Deputy Prime Minister has issued a statement expressing his utmost concern over the allegations made by WSJ, which he described as severe. While he welcomed Najib's earlier statement denying the allegations, Muhyiddin Yassin said the MACC, the Police and relevant authorities must begin their investigations in earnest. He also said Najib should sue to clear his name.

Abang Din ended his statement asking all Malaysians to pray for the truth to prevail. Amiin.

THE Malaysian Insider is clearly advocating that Najib Razak does not sue Wall Street Journal for defamation. And there I was thinking that the majority of right thinking Malaysians, including most of my commenters/Readers, wanted the PM to fend off the increasingly blatant attacks and take out lawsuits to defend his reputation and that of this country's highest office.

I attach herewith the TMI piece. All the lawyers TMI spoke seem to agree that Najib Razak should instead give his side of the story so as to clarify WSJ's account. In short: Engage. And if he has a case, he can then seek an apology from WSJ.

My view is that the WSJ did not leave Najib much of a choice but to seek legal redress. The allegations against Najib in the article Investigators believe money flowed into Malaysian leader's accounts are done blatantly and are likely to make readers think that the PM is not just corrupt but very corrupt.

Let me know what you think.

And is there no lawyer out there who thinks the PM would be doing the right thing by suing WSJ?

Datuk Seri Najib Razak should proceed with caution following the decision to sue the Wall Street Journal (WSJ) for publishing a defamatory article claiming that billions were channelled into the prime minister’s personal accounts, civil lawyers said.
Thye said it would not be wise of the PM's ministers and his public relations consultants to demonise any media organisation to win in the "court of public opinion".They said Najib must first attempt to get his side of the issue published in the reputable newspaper or demand a retraction and public apology if the report was untrue, before seeking legal redress.
Lawyer Ang Hean Leng said Malaysian leaders like Tengku Razaleigh Hamzah had won suits against foreign publications for injuring his reputation in the Bumiputera Malaysia Finance Limited (BMF) scandal.
"Najib, too, could file a suit in Kuala Lumpur or the United States," he said.
However, should the prime minister file a suit outside Malaysia, he must submit to foreign jurisdiction.
Ang was commenting on investigations into debt-ridden 1Malaysia Development Berhad (1MDB) which have allegedly uncovered billions of ringgit channelled to the personal accounts of the prime minister as published by the WSJ and whistle-blower site, Sarawak Report.
Both quoted from documents from the 1MDB probe that is being carried out by the Malaysian government, with Sarawak Report claiming that the Attorney-General was also aware of the information.
The documents show that US$700 million (RM2.67 billion) was moved among government agencies, banks and entities linked to 1MDB and finally ending up in the prime minister's personal accounts in five separate deposits, WSJ said.
It said that the largest transactions were deposits of US$620 million and another one for US$61 million in March 2013, two months before the 13th general election.
However, Najib has denied using public funds in a Facebook posting. Today, a Malay daily reported that he would take legal action against WSJ.
Ang, however, said the media could use justification, fair reporting and qualified privilege as defences against defamation suits.
"The celebrated  British case of Reynolds v Times Newspaper Ltd, which is also adopted by Malaysian courts, established principles relating to responsible journalism  and offer protection to publishers from liability.”
He said the allegations were of great public interest case and the media could carry such news but they must act responsibly.
Ang said Najib could file his action in Kuala Lumpur because his reputation was tarnished more in Malaysia than anywhere else.
"Moreover, the report was published through the Internet and downloaded in Malaysia," he said, adding that a higher amount of damages could be awarded if he was successful in proving his case.
Lawyer S. N. Nair said as a politician, Najib's better option was to clarify the report with WSJ.
"I am sure the publisher will carry the prime minister's version in print or in its news portal in line with the principle of fair play.”
Nair said Najib could ask for a retraction of the report if it was false and demand a public apology.
“But even if the publisher makes an expression of regret, nothing stops Najib from filing a suit. Only that the damages awarded will be lower because the defendant has admitted to an error without delay," he said.
Lawyers for Liberty executive director Eric Paulsen, however, said it was pointless for Najib to resort to a suit because an explanation would suffice.
"Najib should use all medial channels, including the WSJ to convince the public that he has nothing to hide," he said.
Paulsen said it was a futile exercise to attack the media, especially reputable organisations as it was bad public relations."The report came out in WSJ and not a blog whose credibility and professionalism could be questioned.”
Paulsen said politicians like US president Barack Obama and British Prime Minister David Cameron were never in the business of suing the media for publishing public interest issues.
"At the end of the day, politicians live or fall based on public opinion about them. So it is better to engage the media." – July 4, 2015.