Is this the new Terence Fernandez!? 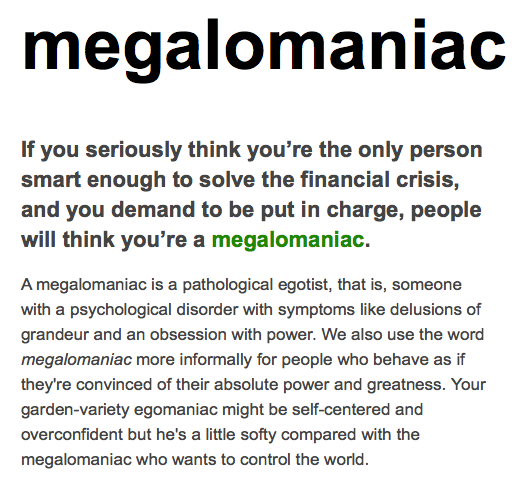 I must say, it's quite depressing to see a journalist as seasoned as Terence Fernandez go down this path, even momentarily. There are more than enough big-headed bloggers and social media writers in this sumpah-serapah writing category as it is.

In any case, Annie isn't the only who finds that Terence's article "wanted to make me puke" [Megalomanic editor who made me pity Rosmah, 3/3/2015]. An editor of a major news organisation earlier sent me a copy of the article and complained of indigestion. He said the exact same thing Annie did: "I'm not Rosmah's biggest fan .. blah blah .. but this whole article is a cheap shot and low blow at the same time.Very unbecoming of a mainstream editor."

Now, I wonder if Terence intended a "reverse psychology" effect with this article, that he actually was trying to garner some sympathy for the First Lady? If not, I hope he bounces back from this soon.

His "megalomaniac" piece, preceded by some excerpts from Annie's:

The title of the article is,

Rise of a ‘megalomaniac’ First Lady

but truthfully, it made me conclude that the writer is the one who is a megalomaniac.

I think he is so full of himself that he believes he is God the All Mighty and can thrash another human being that way.

Here, is the whole article and you can judge for yourself,

She is regarded by many as among both the most loved and the most vilified woman of her time.

Her taste for luxury came from a childhood that was far from what she became accustomed to when she married the man who would one day be the nation’s leader.
She eyed him when he was a greenhorn politician, still trying to earn his place in the eyes of his elders.
But she had the gift of foresight and knew that he would be great one day. So she warded off all other suitors – and there were a few – and set her eyes on him.
Her gamble paid off when she stood beside him years later as he was sworn in as the chief executive.
When she became the First Lady, she could afford to style herself in the latest fashions. She even set trends herself. Some worked; some did not, according to fashion experts.
But what critics and admirers did agree on was that she would come across as a woman of irony.
While preaching to womenfolk of the need for austerity, the benefits of budgeting and tightening one’s belt in a time of economic difficulties, she would be decked to the nines.
It was not uncommon to see her leaving an event for single mothers and heading straight to a boutique or home for a house call. As it is with such powerful personalities, you can summon the boutique to come to you.
After a speech on the need for equal opportunities and controlling one’s urges to overspend, she would be trying on the latest couture gown from Dior (one of her favourites), jewellery from Van Cleef & Arpels among others or even custom-made Salvatore Ferragamo shoes.
While styling herself as “The First Lady of Charity” by heading an influential welfare association, she had to ward of accusations that such outfits were a front to channel funds into Swiss accounts in hers and her husband’s name.
Even government programmes which were dressed up as people-oriented projects to uplift poverty or increase the nation’s wealth were alleged to be projects to secure the First Couple’s retirement.
There had been increasing distrust and dislike of her by the rest of the Cabinet as she positioned herself as the stand-in for her husband – the country’s leader – when he is indisposed.
She had never hidden the fact that she would be very comfortable to fill that role permanently. She was already enjoying all the wealth and power that comes with being the First Lady. The potential of unfettered wealth and power was tantalising to say the least.
Due to her inherent power and control of several key personalities in the police and military, there were half-hearted attempts to oust her as well as her husband.
It did not augur well for the detractors and political enemies that they too had skeletons in their closet from ill-gotten wealth to mistresses.
It is said that even when her husband’s own popularity among the masses and his own circle was waning she made sure they continue to support him – through impassioned pleas, threats and financial gratifications.
While she had claimed to represent the working class, she was quick to defend the government’s cut in wages and spending and introducing new taxes.
Soon the people, especially the working class built resentment against the first couple who now seemed detached from reality with their jet-setting lifestyle and her particular taste for the finer things in life.
Her critics began likening her to Marie Antoinette – the executed former Queen of France and her now infamous “let them eat cake” remark.
“Megalomaniac” was just one description of her by a political analyst.
Still, her influence had already spread far and wide – including the corridors of power, where she is first to have access and in some cases give her approval of her husband’s schedule.
Her love for song and stage is legendary and began from her time as a little girl where she would dream of the big cities where, in her own words are "marvellous places, where nothing was given but wealth”.
Many official functions would see her in attendance and grabbing the limelight from her spouse who would often be left standing behind her.
However, being upstaged by his wife was the least of the nation’s chief executive’s problems.
With a tanking economy and a more hard-line approach to quell dissent and criticism, he was also losing support among the middle class, where arbitrary arrests and imprisonments were becoming the norm.
But this and several coups attempts did not stop Juan Peron from becoming president of Argentina three times in over 20 years.
And yet, he is still remembered today by most of the world simply as the husband of Eva Peron. – February 25, 2015.