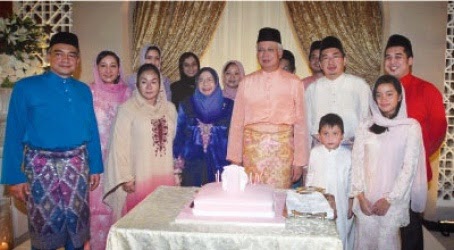 To bring down Najib, first bring down those closest to him. And nobody's closer to Najib Razak than his dear wife, Rosmah Mansor, and his little brothers. Break them up. Get them to be at loggerheads!

What Asia Sentinel is trying to do - to suggest a severe rift in relationship between the First Lady and the siblings, especially Nazir Razak - is nothing new. It is also nothing short of despicable. At one time, our politicians from both divide were so intent on "killing" one another they didn't think twice about dragging their foes' moms, dads, wives, husbands, etc. Then they decided on a kind of truce on that. Which was good. Something news portals like Asia Sentinel should try and emulate, for the sake of decency.

In any case, Rosmah has denied that she was out to pull the First family apart. It's "the last thing I'd do as long as I'm alive ...", she said.

p.s. It's hard to miss the fact that the new round of attacks on the PM is also aimed at his close advisers and friends. While Asia Sentinel tackles the family, the Sarawak Report focuses on Paul Stadlen who advises Najib Razak on media matters. They complain that the dude's been doing Too much partying ...

And then there's the fresh attack on Jho Lo-1MDB, which may set up a mouth-watering duel in court between Tong Kooi Ong, a close friend of Anwar Ibrahim, and Jho Lo, the man who knew how to party, alright and said to be close to Rosmah Mansor. On Jho Lo, I tend to agree with Another Brick in the Wall: Time for Jho Lo to start singing ...
at February 12, 2015