I'm NOT Paulsen, either

Updated, Thurs:Bloggers say Paulsen is LUCKY this is Malaysia, where the Muslims are patient and rational and NOT insecure ... Bloggers Hammer into Paulsen, The Mole, Jan 14


Kudos, Zahid Hamidi. IGP. Our oft-maligned cops. Peace-loving, God-fearing Malaysians.Freedom of expression does not include the freedom to incite. To provoke others. To start a war.This is Malaysia lah. Not France. 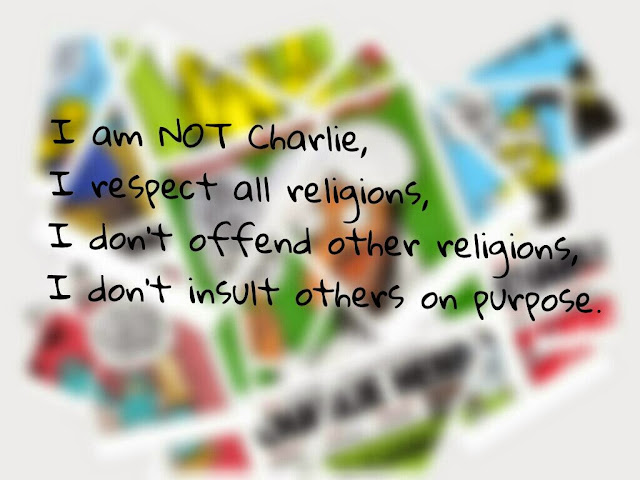 this slippery slope of insecurity you and umno weave into the malay psyche has already backfired. malay muslims are so sensitive that even a sneeze in front of a mosque will one day offend them. exaggeration but you catch my drift.

typical crutch mentality, everything needs to be protected. its as if malays are born extremely stupid, with no spiritual or mental strength nor any intelligence to decide what is good nor bad.

welcome to the real world. where people laugh at jesus in comedy clubs and paint the pope in poor light. its distasteful.. yet you dont see people shooting up cities in the name of god.

there is no safety in such insecurity.

Is eating pork and hugging dogs which are forbidden in Islam a provocation ? It must be according to the repugnant & avaricious Mahathir and a lot of the Malaysian muslims.
Therefore those practicing such actions are only asking to be killed ? Why is Indonesia as the biggest muslim country in the world allowing Bali to be part of Indonesia. Bali allows roast pork to be openly sold and most of the Balinese are non muslims as part of Indonesia ? The Balinese are one of the lovelier and peaceful people in the world, in fact a lot more peaceful than a lot of Islamic countries in the world. How come ?

Nice picture, but not practised in this country, sadly.

Not by a very long shot.

Go ask the Hindus & Christians 'bout that one.

Or are you speaking on their behalf, the very same error that cinabeng Eric made?

Ok going by your logic if a kindy kid makes a snide remark like the leader of Malaysia is a liar because he was playing golf in Bangkok when he was supposed to be down with E Coli - we should blow him to smithereens? Because we are not in France?

Good for you if you don't insult others. But if others insult you, do you shoot them? Do you murder a dozen people for insults?

Insulting religions is bad taste, but reacting to it in a barbaric way is even worse. As Zakaria has stated, there is no blasphemy in the Koran, only in the Bible. In any case, God or Allah or Yahweh or whatever, by definition, is eminently capable of defending Himself and need no human to defend Him.

In Malaysia we are facing a new phenonmenon whereby everyone else has a right to discuss, question, probe, malign and twist Islam. The followers of Islam are not suppose to react or stand up against this. If we do we will be classified, labelled and compartmentalised.

Welcome to Malaysia, where the native Malay Muslims are so insecure and angry they shoot up and kill people who insult their religion and prophet.

Gee, they must have been doing the right thing.

We should praise and follow their enlightened ways of freedom!

Yeeeh we got your drift .
So becareful not to sneeze in front of mosque or surau .
We have prepared some special antidote for your nose .

Bro , you should know who started all this instigation .
In case you dont , it is your DAPig gang ... anjing and kuching kurap incident are always fresh in mind .

Then , there is a master instigator in the ' bintang ' paper by the name WCW , whose speciality is in getting malay to fight each other . He succeded in a very short time while the communist PKM failed for many decades.

And so you say it is insecurity ... we say prevention . Unless you want to see another May 13 event .

So, if the French government gives financial aid to the Charlie Hebdo magazine, and the same magazine prints 1 million copies of a special issue that is sure to offend Muslims because of a certain depiction on it's cover, Wisma Putra will call in the French Ambassador to Malaysia to protest and send a diplomatic protest note to the French government?

If there is the courage of conviction, Wisma Putra will do exactly that.

Or maybe the rent-a-crowd can be prevailed on to demonstrate in front of the French Embassy in KL?

What say you, Bru?

The latest trend is to "debate & discuss" Islam by all and sunder. Be they with some knowledge, little knowledge, vague knowledge or no knowledge. They are the true children of iblis.

Thanks for the usual confused mish-mash between religion, politics and race.

You can't tell the difference, obviously, but when in doubt, always yell Mei 13, ya bro.

You're like the VCR or cassette, and yet you wonder why the world is passing you by.

Guess what, brudder? The world has changed, moved on. You cannot kill, rape and commit arson and looting in the name of your race and religion. Unless you are so fundamentally insecure that resort to violence is the only logic that you and your kind understand.

But, never mind. There are ways of dealing with people who espouse your thinking. And with recalcitrant countries too.

Go peddle your alarmist and racist views someplace else, brudder!

No, I think the difference is that we don't react too violently.

I blame our good food.

Way to go!!
Give them hell.

Correct me if I am wrong, but I don't remember reading, hearing or seeing Ibrahim Ali insulting other religions.

This guy who called himself charleskiwi is as fake as his name that the moment you see this name you know shit and trash will follow.

The ignorance and stupidity of some people.......