"The Council has been talking about freedom of the Press. It's funny that no media coverage was allowed." - lawyer-blogger Rapera

It's no secret that the Bar Council is a major force behind Bersih, the pro-Opposition movement that insists that the national electoral process is flawed, dirty, unfair despite the huge gains made by the political parties that it backs in the last two general elections. Former Bar Council boss Ambiga, after all, was the main force behind the post-2008 Bersih and is still one of Anwar Ibrahim's Pakatan Rakyat poster ladies despite her incessant claims of being non-partisan.

So it must come as a big blow to the Council, to Ambiga and Bersih supporters generally when the Bar Council's own members are now crying foul over the process to elect new Councillors that took place yesterday.

The Press was not allowed but thank God the Mole spoke to members for this story: 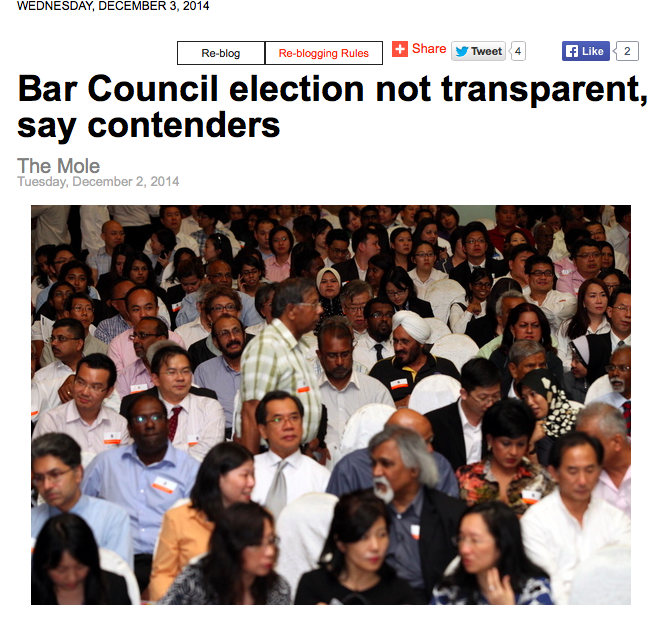 The Bar Council’s election for the 2015 – 2016 term ended with controversy when running candidates were prevented from witnessing the entire vote-counting process.

Contender Mohamad Reza Abu Hassan told The Mole that candidates were only allowed to see the process through a live video streaming if they signed a letter of undertaking (LOU).

“I refused to sign it because the election committee could not tell me why we have to sign it.

“They said although it is not stated in the law, that is an internal procedure that we have to oblige,” said Reza, adding that he doubted the transparency of the election.

“Candidates were not allowed to see the live counting process.

“They only showed us the video streaming where I can only see a pair of hands and ballot boxes,” he added.

Reza said he was subsequently barred from watching the live streaming for refusing to sign the LOU.

It was learnt that the media was also prevented from covering the election.

Reza, who ended on the 17th spot, claimed he was not surprised with the result as majority of the 12 were “of the same clique.”

Lawyer Datuk Mohd Haaziq Pillay said the council should prove its transparency by allowing members to witness the counting process.

“Besides scrutinisers, the members should be able to be part of the election.

“The counting process should be made public so that the contenders or other members can ask for a recount if they are not satisfied,” he said.

Mohd Haaziq however agreed that the media should not be allowed to cover the election process.

“It’s a private body…But members may turn to the media if they witness any wrongdoing in the process.”

“She has proven to be a gem because she always supports the council and attends every function it organises.

“She is very vocal in her opinions and the council could benefit from her quality.”

Another contender Datuk Jahaberdeen Mohamed Yunoos also told The Mole that he heard about candidates being prevented from watching the vote-counting.

“The council has been talking about freedom of press but it’s funny that no media coverage is allowed,” he said.

“I did not hear any complaint regarding the election.

“Everyone has the rights to vote for the candidate they support so we should all respect and accept the results,” said Ravi, who ended up at the ninth spot.

The restriction on the Press provokes the mStar to call for greater transparency: Pastikan Pemilihan Majlis Peguam Bersih, Dec 3

p.s. Me, I say clean up your mess quick, mates. And please explain why the Press was not allowed ...