"Criticism is based on the truth; in a Sedition, the truth is not at all critical. " - Anonymous 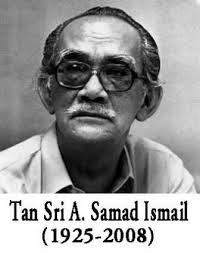 The early history of Malaysian journalism is punctuated with the detention of journalists - real journalists - under the Internal Security Act. Arwah Pak Samad Ismail, for example, was accused of being a Communist by the same government that had sought his wisdom when Tun Abdul Razak was Prime Minister. As soon as Razak was gone, they took Pak Samad from his home in front of his wife and children and incarcerated him for 5 years. Pak Samad was released only after Dr Mahathir Mohamad replaced Hussein Onn as PM. No journalist was detained under the ISA during Dr M's tenure as Prime Minister, proof that you can have the ISA and use it judiciously.

Under Abdullah Ahmad Badawi, however, the Home Minister from Johor committed the dumbest act by any Home Minister with the detention of a junior reporter for 24 hours under the ISA "for her own safety". Proof that the ISA, in the hands of some people, can be dangerous instead of beneficial to public health and peace, which was what the ISA was meant for.

In the same vein, the perception of the Sedition Act today. The arrests of Malaysiakini journalist Susan Loone and pony-tailed Azmi Sharom, the lecturer with a column in the Star, must be viewed as acts aimed at deliberately undermining the position of the Sedition Act, which has helepd kept at bay the racists and the anarchists in some of us and maintained the peace that we enjoy. What could Ms Loone and Encik Azmi possibly have done to shake our foundations as a society? Apart from minor intellectural irritation, very little, I'd say.

But what have their arrests achieved? Renewed hatred and greater suspicion towards the Sedition Act. And rightly so! Their arrests have convinced many people that the Act is draconian and serves the purpose of those in power.

So I am happy to hear (and read, h e r e) that the Attorney-General is reviewing those two cases with a view of amending the charges against the lecturer with a column and the journalist whom we bloggers used to call "loony".

Tan Sri Gani Patail had gone this way before: he'd DNA-ed (discharged not amounting to acquittal) Raja Petra Kamaruddin and Syed Akbar Ali  after charging them with sedition during the Pak Lah era. Now those two, you'd agree with me, were rocking a lot of boats when they were fab - and they still are at the top of their games, if you want to compare them with Azmi-Loone.

But the AG, as the guardian of the Sedition Act, must act fast. The longer he waits, the more maligned the Act.

Most of us believe that criticisms against the Government must not be stopped; in fact, they should be encouraged. But people must also know the limits of freedom and the responsibility that comes with it. They cannot say or write whatever they bloody like.

Like the ex-IGP Tan Sri Musa Hassan says in The Mole's Mala fide against the Sedition Act?, "If the Act is no longer here, people can do or say whatever they want under the sun".

Will the Sedition Act be repealed? Are we ready for it? I am of the view that rules and regulations, laws and legislation ought to be amended now and then. It is about moving with the times ...

To be cont'd: Proposed amendments to the Sedition Act that you would agree to but have not been told about ...