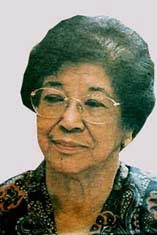 She entered the King Edward College of Medicine (subsequently known as the University of Malaya and then University of Singapore) in 1936 but graduated only in 1947 as her studies were interrupted by the Japanese occupation of Singapore during the Second World War in 1942-1945.
Her determination to become a doctor superceded the norms of the times when it was unheard of for a single Malay girl to journey from her hometown AlorStar by boat to Singapore. Even the Second World War did not deter her from eventually finishing the course once the Japanese surrendered, taking 11 years in all to complete. Subsequently, she specialized in midwifery in Dublin in 1957 and returned to Alor Star where she was also the Royal Midwife to the late Sultanah of Kedah.
During her medical studies she met her future husband, Datuk Dr Abu Bakar Ibrahim (subsequently Director, Institute of Medical Research), also from Alor Star who graduated in 1951, by which time the medical school was known as University of Malaya. They returned to Alor Star and married in early 1950. Their first-born  (Tan Sri  Dr Ridzwan Bakar) was born in December of that year, to be followed by three other children subsequently.
When her husband was transferred to Kuala Lumpur to serve as the Medical Superintendant of Kuala Lumpur General Hospital, Dr Salma became one of the first Malay private practitioner in the country to open a private clinic in 1967 – Klinik Salma, which is existent till today. She retired from private practice at the ripe age of 82.
She was awarded the BCK (Bintang Cemerlang Kedah, 1957) and DPMK (Dato Paduka Mahkota Kedah, 1996) by the present Sultan of Kedah. In 1997, she was made a Tan Sri with the conferment of the Panglima Setia Mahkota by His Majesty the Yang Di Pertuan Agong.
Throughout  her career,she had been active in social work, among which were the Higher Education Advisory Council, Governing Board of Tunku Kurshiah College, President of Private Practitioners Association of KL and President of the Pan-Pacific Southeast Asia Womens Association.
As a woman and a doctor, she lives by the principle: “Have confidence in yourself, be honest, do not talk bad about others and give help to those who need it”.


Bru's notes: Our salam takziah to our dear friend Dr Ridzwan Bakar and family. May Allah bless her soul. Alfatehah.