Suing Malaysiakini: The hypocrisy of the Bar Council and others

Updated 10/6/14:
My view on politicians taking lawsuits against journalists is carried by www.therakyatpost.com, an up-and-coming Malaysian newsite, h e r e. The reporter did a good job at capturing what I said to him on the phone. I just need to point out that YB Jeff Ooi did not go after me for the comments in my blog; rather, it was he (before he joined politics) who was persecuted for the comments in his blog left by Anonymous readers, a predicament not unlike Malaysiakini's current one. Jeff came out with a posting to tell readers to be careful with their comments, that life in blogosphere wasn't living in a vacuum. "... "bear in mind that whatever is illegal offline is illegal online in this country," Ooi had said. (For some context, read h e r e.)

Christopher Leong issued a long press statement (see below) following the lawsuit against Malaysiakini by Prime Minister Najib Razak. Perhaps he wasn't born yet when the following suits were taken against our media? 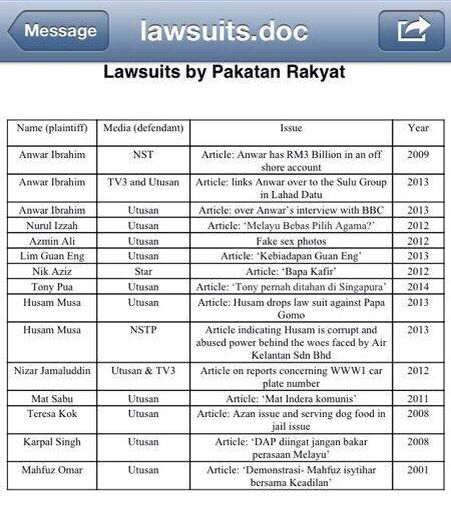 
The Malaysian Bar views with concern the suit filed by the United Malays National Organisation (“UMNO”) and Prime Minister Dato’ Sri Mohd Najib Tun Abdul Razak against an online news portal and its editors for alleged defamation.  The defendants in the suit are Mkini Dotcom Sdn Bhd, Editor-in-Chief Steven Gan and Chief Editor Fathi Aris Omar.  The alleged defamation is with respect to the publication by the defendants of two separate compilations of comments by members of the public.

Every public official is accountable to the people who have entrusted him or her with a position of public office and responsibility.  The duties of good governance and accountability should demand the public official be able to endure the full brunt of free speech.

Public officials — especially those holding high public office — and political parties should not resort to lawsuits for defamation as an answer to criticism or comment, whether or not such criticism or comment is unfounded and untrue.  They should accept such adverse comments, no matter how vitriolic, obnoxious or untrue, as natural hazards of putting themselves forth into public political life, so long as it does not affect the person in his or her private sphere.

The Prime Minister should not use civil defamation action against criticism, whether substantiated or otherwise.  The Prime Minister should have taken the opportunity to engage in public explanation, debate, education, counter-arguments and vindication by conduct in answer to untruths and as the means of redressing any alleged injury to reputation.

If the comments and issues complained of are sufficiently important for correction, the Prime Minister should reply in the public arena, and let the measure of public opinion be the judge of the truth.  Public funds and resources should not to be used or expended on defamation suits with respect to matters and comments made in relation to his public office.

In this regard, the approach of the Supreme Court of the United States of America in the leading case of New York Times Co v Sullivan, where the defamation suit by an elected politician was dismissed as being contrary to public interest, set out with approval the following:

Cases which impose liability for erroneous reports of the political conduct of officials reflect the obsolete doctrine that the governed must not criticize their governors…The interest of the public here outweighs the interest of appellant or any other individual.  The protection of the public requires not merely discussion, but information. …Whatever is added to the field of libel is taken from the field of free debate.

The Privy Council in Hector v AG of Antigua and Barbuda expressed sentiments, which we in Malaysia should heed, namely:

In a free democratic society it is almost too obvious to need stating that those who hold office in government and who are responsible for public administration must always be open to criticism.  Any attempt to stifle or fetter such criticism amounts to political censorship of the most insidious and objectionable kind.


We urge the Prime Minister and his political party to withdraw their defamation suit against Mkini and its editors.  The Prime Minister should instead take the opportunity to reply or rebut any adverse or incorrect comments made by members of the public.